How to Manage Your Dog's Energy

Those of you who’ve listened to Kevin Behan’s radio interview heard him talk about the two types of energies operative in canine behavior: electricity and magnetism. Some of you may have also read the comments section of my last post, where I gave a response to Summer’s mommy about a problem she’s been having in getting her dog to do any off-lead heel without vocalizing. This post begins with part of that exchange:


How To Manage Your Dog’s Energy 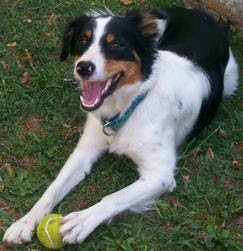 Summer's Mommy: One question, sometimes she gets so riled up with the exercise that she wants to bite my left arm. I think it’s somewhat cute, but in competition that would lose me some points. Also she can get quite vocal (growling, short staccato barks) when she's in drive in the heel. Again, more areas where I can lose points. Do you have any suggestions on how to convert that drive that's being manifested into the biting/barking/growling and channel into just the act of heeling itself? I don't want to punish her or say no, but even as I praise her when she does it, she doesn't stop the behavior even with praise.

The biting is a result of a strong attraction (magnetism) while the vocalizing is an expression of nervous tension (electrical energy). She's also trying to "tell" you something. (What that is, I don't know.)

Remember, when she stayed with me I got to see her behavioral idiosyncrasies up close, and I said I thought that even though she's a bit tightly wound, she's also a very sensitive doggie. So it might also help to do more "chase me," "hup!" and "dance with me," and less hidden pops.

PS: Now that I think about it, the "chase me" will probably create more of a likelihood that she'll grip your arm while heeling, so while I might still do that, I would also probably give her some leash corrections whenever her teeth stray onto your arm. You have to be very fluid about it, and you can't pop her too hard; it should be just enough to damper the energy a little, but not hard enough to make her lose interest in chasing you.

Another way to work on this would be to do very short "chase me" sessions using a ball or tug toy as the focal point, and quickly end each go-through with a game of tug. Then gradually increase the length of the game, but then turn it into a "game" of off-lead "Heel!" And follow that with a ball throw or a game of tug, whichever she prefers. If she's still too bitey during the off-lead heel, go back to doing it on lead with the leash corrections to inhibit her from biting during the heel. The idea is to let her know that she can't bite while heeling, but that she'll get a big old payoff once she's finished.

I hope that helps!

Okay, so what do I mean exactly when I say more magnetism and less electricity? I’m essentially describing the difference between drive energy (i.e., desire/connectedness) and an overload of nervous tension (i.e., neediness/feeling disconnected).

The body of any animal has two basic energy systems. The nervous system (which includes the brain, the spinal cord, and all the neurons, axons, and dendrites), and the emotional system (limbic system, endocrine glands, sexual and sensory organs). Both types of energy are necessary. For instance, you can obtain a great deal of knowledge about a person’s internal organs through an MRI machine: a magnetic resonance imaging. But it doesn’t work unless you plug it into the wall first.

As I’ve been thinking over Jacinta’s and Sang’s problems with their dogs, Summer and Roxy (Sang complains that Roxy gets overstimulated, which basically means she’s got too much electrical energy running through her system), and it seems to me that there are four basic ways to use, manage, control, and modulate your dog’s natural energy.

First let’s talk about the differences between electrical (neediness) and magnetic (desire) energies.

We all have survival needs, and the survival instinct exists to ensure that we act to protect ourselves from danger, drink when we’re thirsty, eat when we’re hungry, etc., etc. Sometimes, however, we attach survival feelings to something unrelated to our actual survival needs. How many times do we tell ourselves that we “need” to get to work on time, or that we “need” a raise or a new car. Another example is the kid, like Ralphie in The Christmas Story, who thinks he’ll die if he doesn’t get the air rifle he wants for Christmas. When we attach neediness—survival energy—to non-essential things it screws us up, it puts stress on our bodies and actually makes us less efficient at getting what we really need. It also makes us feel unconnected from our co-workers, who—come on—aren’t going to kill us if we’re late to work, or our bosses, who are also not going to kill us. And it makes us feel like our parents “don’t understand” us when they say it won’t kill us if we don’t get what we want for Christmas.

Yet, here we are. We’re all still alive.

On the other hand, when you have a strong desire for something—and I mean pure desire, without any neediness attached—you often feel a sense of steadiness and calm as if your desire has created a direct link to whatever it is you want so badly. You are connected.

Desire is governed by the sex instinct; never mind the actual, specific act of mating, the sex instinct governs the creative aspects of life, in all its forms. When you’re in a state of pure desire you almost know you’ll get what you want eventually. You have new, unexpectedly creative ideas on how to do things. And if you hold on to that feeling of desire—that fire in the belly—and if it’s strong enough, it will almost always bring some kind of positive results. It sets things in motion. This is what I mean when I say that desire has a kind of magnetic energy.

I think this is a helpful model in learning how to manage your dog’s energy. And as I see it, there are four basic ways to do that.

The Four Ways to Handle Your Dog’s Energy

One: Give your dog a satisfying “ground wire” to offload excess energy.

Ground wires include tug-of-war, fetch, play sessions with other dogs, the “eyes” exercise, and even taking your dog on long walks in nature. (Believe it or not, trees and grass are natural ground wires for a dog’s energy.)

I’m trying to codify everything here, but a lot of what I “know” about this stuff is intuitive or comes from my subconscious mind. I’ll give you an example: The other night I had a session with a new client. They’ve got a pit bull named Latte who was found on the street, emaciated, over a year ago. She’s reportedly been a lovely girl since then, very affectionate indoors, very obedient and willing to learn, but she’s started exhibiting occasional leash aggression recently.

When I came in and sat on the sofa, Latte was unable to settle down. We tried giving her a bone or a ball, but nothing seemed to satisfy her, so while I was discussing options—describing the possible source of the dog’s behavioral problems, and she was still at it, trying to jump all over me—I put my fingers between her teeth, hoping to give her a chance to ground her energy by mouthing my hand. She pulled away, zipped around the room a little, then settled next to me on the couch again and kind of “sneaked” in close and started to nibble my fingers, hoping I wouldn’t notice. I let her do that. Five minutes later she was sound asleep.

I didn’t pay much attention to this; it happens a lot with the dogs I see. But in a subsequent conversation with her owner, she said she thought it was amazing that Latte had been so relaxed that she’d fallen asleep next to me on the couch. “She has never fallen asleep with someone new in the apartment. Ever!” That’s when I remembered what I had done with my fingers, and I realized that by doing that, I had, in essence, given the dog permission to use me as a ground wire, which enabled her to download some of her excess energy. And that’s why she fell asleep.

This will give your dog a better ability to handle his excess energy levels on his own. Instead of just plugging him into a ground wire (like a tug rag), this would be similar to replacing old corroded wiring with newer, stronger, thicker wires. It’s also analogous to removing emotional blocks. This is where the pushing exercise comes in handy. Also, certain training exercises where the dog has to change emotional gears quickly—things like the “off-lead heel” or the “down-while-running” and conflict training—would also fall into this category. They make the dog’s energy system more productive and less wasteful.

Three: Drain the battery/shut down the system.

This is where a crate comes in handy. Another thing that helps is not feeding into the dog’s nervousness. That’s part of what worked with Latte the other night. If I had reacted to her energy with any kind of “dominance” or fear, she would’ve had even more trouble settling down. If the dog has no excess energy from you to feed off she’ll be able to calm down much quicker.

This is where praising the dog to settle his nerves works wonders. When a dog has too much nervous energy and you praise him, this will often help him relax. I’ve described this in more detail (excruciating detail, some might argue) in my article on praise. But in terms of energy exchange it works like this: the dog is nervous (electric energy), praise makes him feel connected to you (magnetic energy)—you’ve transformed that excess buzzing of electrical energy—which eventually has to find a way to ground itself, come hell or high water—into smooth magnetism, which has more of a gentle, steady hum to it. Make sense?

Interrupting the flow of electricity by applying light shocks on the collar, a well-timed throw chain; all of these things have a tendency, when applied to an overly nervous dog to shift her focus from her choppy, disconnected, solo-mood-type behaviors to something more like a group-mood feeling. Again, you have to be very careful and not apply too much pressure or you’ll get the opposite result.

I’m still working out the various ways of describing this stuff. As I said, so much of what I do is so deeply ingrained into my subconscious mind that I rarely pay any attention to what I’m doing anymore. It happens naturally, like breathing. But I hope this helps you understand the basic premise of how Kevin’s model—of the dog as an energy system—works.

I look forward to hearing everyone’s feedback and ideas on this.

"Changing the World, One Dog at a Time"
My Psychology Today Blog
Join Me on Facebook!
Follow Me on Twitter!
Posted by LCK at 7:45 PM 31 comments: