Those of us who are familiar with the Natural Dog Training philosophy are so used to being ahead of the curve on some training issues it can sometimes come as a shock to us when we find out how many of the techniques we've been using for years are met not only with skepticism but hostility by others in the field.


Barking at the Storm: Curing Thunder Phobia in Dogs 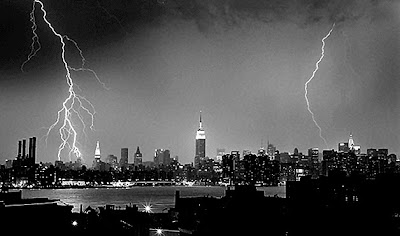 Years ago -- back when my dog Freddie was having almost daily panic attacks over any little sidewalk noise here in New York City -- I ran into a dog owner I knew who had a Sheltie named Duncan.

I told him about Freddie's panic attacks and he said that Duncan had once had a similar problem. He was afraid of thunderstorms.

"How did you help him get over it?"

"I don't know. One day he was scared out of his wits. Then out of nowhere, he barked at the thunder, and that was the last time he was ever afraid."

This made sense, because Kevin Behan had once said to me that "aggression cures fear." So, I reasoned, if a dog can bark while he's frightened, even if there's nothing to bark at, the fear may go away -- as it did with Duncan -- just because of the barking, and nothing else.

As a result, whenever Freddie had a panic attack after that, I gave him the "Speak!" command. He didn't always respond right away; it's hard to listen to commands when your brain is full of fear and static. But once he did bark, his tail, ears, and shoulders immediately came back up, and he gave me a look, as if to say, "What are you looking at? Are we going for a walk or are you just gonna stand there?"

Over time, his panic attacks grew less and less serious, I think partly because of what I learned from Duncan the Sheltie. (I eventually resolved the issue altogether using a technique from Kevin Behan's book, Natural Dog Training.)

I'd like to know if anyone else has a story like this! It doesn't even have to be about fear-related issues, though would be great too.

Over the years a lot of readers have given me great stories about how Natural Dog Training techniques have helped their dogs get over fear, aggression, and other behavioral and emotional issues. I'd like to stockpile as many of these stories as I can for a possible future book on solving behavior problems the natural way!

Thanks! I look forward to your stories!

My former spitz/collie breed was afraid of new year's fire crackers that kids used to throw on the street, and I was afraid too, but we got equally angry and chased them together when we spotted them! If she caught up with them she nipped their ankles a few times.

Now I work with a mixed breed, also spitz type, very sensitive. Sometimes the military practice shooting some few miles from here and she gets very afraid and runs home if she happens not to be on the long line.

There seemed to be some success with "The jolly routine" - talking happily, praising her and feeding lots of meatballs when a "boom" was heard. The question is whether you reward a fearful reaction, or if counterconditioning will win.

I have also taught her the pushing game, that is, teased her with a meatball and given it to her only when she made a real physical effort to get it. I have also through body language and a sound encouraged her to start bouncing up and down towards me (and making noises) in play. She can do it if she is not too fearful.

DOING something, using your body and muscles, is probably very important to cure fear - including expressing yourself through sound?

I will also try the barking method!

When my pit bull Stella was a youngster (4-6 mo.) she was crazy afraid and aggressive toward the vacuum cleaner. I sat her up on the couch and fed her some chicken then turned it on (more chicken). Then fed her chicken each time I made a pass with it. The next time I got it out, she jumped up on the couch wagging her tail and has never been afraid of it since. She's two and a half now & has recently become terrified of skateboards or anything that sounds similar to "drop" of one i.e. a nail gun. The chicken hasn't worked this time around so I may try the barking as well. Meanwhile, thanks for the long list of great tips.

Lee, it was your story with Freddie that led me to help my GSD with her fear of both thunder and the snow falling off the roof (which makes the whole house shake sometimes.) While I would not consider her completely "cured", she rarely paces, pants or panics during storms or when the snow crashes. We did the barking (yes, even in the middle of the night), sometimes I took her outside for intense play during the approach of the storm, it was usually followed up with putting her in her crate. I also used Rescue Remedy during this period, not sure if it helped a lot of not.

My other dog Stevie will sometimes get over charged in the car and pant and whine. I will stop the car and take him out for some barking and pushing so we can continue our trip in peace.

I noticed when i was watching Pillars of the Earth there was a thunderstorm on TV and one of the dogs got a bit scared. so if someone wants to work with their dogs fear of thunder, they can use a recording of thunder and try to train the dog to bark at thunder or reward any moment when they do not show fear etc. rather than having to wait for an actual thunderstorm to do the training
this can also be done with other sounds which create unwanted behaviours such as knocks on the door etc.

My fairly new sanctuary dog, Betty Boop, a Beagle/Basset mix, barks at thunder. She doesn't seem to tremble like my old little Sheltie but just barks back like your friend's Sheltie. Most of the sanctuary dogs here waiting for good homes are failed hunting hounds; I, too, have neighbors who target shoot. Boy, head for the house and dog door they go when shots ring out. There is a recording of thunder, BTW, which starts out quietly and grows in intensity to help your dog adjust. I have no clue how to find it though. Just found your blog through the Dog Guide on Dogster and your Alpha Roll entry. Thanks - am adding you to my best blogs list :).