Why Do Dogs Mark Their Territory?

...
Why Do Dogs Mark Their Territory? 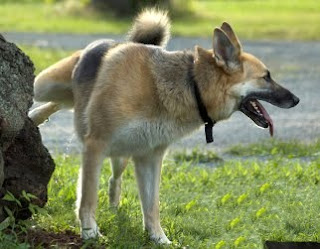 The simplest answer is they don't.

First of all, dogs urinate far beyond the boundaries or limits of their so-called territory. Secondly, males aren't the only ones who lift their legs; some females (usually the anxious type) do this as well. Thirdly, dogs don't just urinate on large objects, but on vertical objects (trees, posts), unfamiliar or inorganic objects (tires, plastic bags, fire hydrants), and on anything carrying a scent that the dog wants to cover (such as another animal's urine or feces).

Coren is not responsible for the myth. His offhand re-telling of it, as if it were a scientific certainty, merely highlights a general tendency in science: in attempting to dissect how an animal's behavior might serve an adaptive purpose -- in this case marking would be a hypothetical means of limiting competition within a niche or habitat -- most scientists blur the line between what makes sense in terms of the grand arc of evolution, and what an individual animal is capable of in terms of its cognitive abilities.

Of course if a biologist who witnessed the African wild dogs madly scrabbling up the tree trunks did so with the belief that dogs urinate to send a message to other dogs, their behavior would, no doubt, confirm his hypothesis. But if we approach this behavior with a clearer mind we might ask, how could these dogs possibly know the "nose height" of another, purely hypothetical dog who might (or might not) come along at some undetermined point in the future?

In The Secret Life of Dogs, anthropologist Elizabeth Marshall Thomas compares a dog's urine marks to Hansel and Gretel's trail of pebbles and bread crumbs: a means of finding their way home. But that would mean the dog was planning for the potential (thus, hypothetical) possibility of getting lost. I've never seen any evidence for that kind of thinking in the dogs I've known. They live totally in the now moment.

Roger Caras, whose voice used to be heard each year at the Westminster Kennel Club Dog Show in New York, was fond of saying that when a dog sniffs a fire hydrant he's "reading his mail". This is highly anthropomorphic, yet it's hard to dispute that a dog does get information from the scent of other dogs this way. The only question is, did the dog who left the scent do so with the intention of "sending a message" to the one who comes along later?

Territory is defined by biologists as an area which an animal will defend against intruders of the same species. But how is such an area delineated in the animal's mind? Are its boundaries visible and concrete or imaginary and abstract? Is a dog capable of forming a mental image of where his territory begins and ends? And if animals have no sense of self and other, how could they think of a territory as "mine" or "belonging to me?"

Meanwhile, I got my first glimpse into a more reasonable explanation of why dogs mark -- one that has nothing to do with "territory" -- many years ago when I took my dog Freddie to a training session I had with a six-month Maltese male named Buckwheat who hadn't had much socialization with other dogs. Freddie's presence made Bucky a little nervous, but not to the point that he couldn't learn the games we were teaching him. However, at several key points during the lesson -- which was taking place in the dining room -- I put Freddie in a down /stay by a piano in the living room, to keep him out of the way. Later Bucky's owner told me that immediately after Fred and I left, Bucky had gone over to the piano and had urinated on the spot where Freddie was told to lie down.

Why did he do that? To mark the limits of his territory? He was already inside his territory; in fact, not even inside his territory but inside his "den." Did he do it to send a message to Freddie? The answer is simple: The rug held remnants of Freddie's scent. That made Bucky nervous so he put his own scent on top, to cover it up. Yes, in a sense, he marked the piano, but not to tell Freddie that it was his. If anything, he did it just to relieve his internal tension.

A few years later, while doing research for a subplot about kidney disease for my 4th novel, 'Twas the Bite Before Christmas, I learned that in mammals, the need to urinate is controlled, in large part, by the neuropeptide vasopressin. Higher levels of vasopressin increase water retention, reducing the need to urinate. Low levels are associated with excessive urination, bedwetting, etc. Vasopressin also has a converse relationship with the stress hormone, cortisol: when cortisol levels go up, vasopressin goes down, suggesting that there's a causal relation between stress and excessive urination.

So it seems far more likely that when one male detects the scent of another dog, (particularly an unknown male), it could cause a perhaps low-level stress reaction, which would then increase his need to urinate. As he does he would feel the pleasure of releasing some of the tension and pressure  in his body. And thus, over time, his body would self-reinforce the behavior of peeing on top of another dog's scent. It would be a purely emotional and perhaps Pavlovian response, not based on intellect or other mental faculties.

Later, when this dog smells a urine mark he'd made earlier, he would probably re-experience, on some level, the original lessening of tension and the pleasure it produced. (Of the five senses the sense of smell is the one most likely to evoke memories.) He learns to mark in order to relieve emotional tension and to feel connected to his environment.

This explanation is simple, whole, and complete. It requires no complicated thinking on the dog's part. It obeys the rules of parsimony and logic. And it only requires that a dog have the ability to experience tension and pleasure, and to form simple physical and emotional associations.

LCK
"Changing the World, One Dog at a Time"
My Psychology Today Blog
Join Me on Facebook!
Follow Me on Twitter!
Join the Dog Trainers Network!
Posted by LCK at 12:37 PM

Okay, I get where you're coming from. But now I'm wondering if my two dogs are too nervous (I do have a nervous female who raises her leg to urinate). My 9-month-old Dachsund/Yorkie mix is not a nervous type but would love to urinate on everything during a walk. Is he a closet-nervosa, so to speak. I do notice that if he spends a lot of time smelling one spot he usually won't do anything there. A quick sniff usually means he's going to mark it.

This makes sense, but how do you stop this behavior when the urination takes place in places the dog should not urinate? I recently adopted two dogs from a local shelter (within 2 weeks) and one of them has secretly gone off to our bedroom and urinated both on my bathrobe and on my pillow (this was on two different occasions, not at the same time). I'm pretty sure I know which dog is doing it, but not how to get her to stop.

The dog who's urinating is probably under a lot of stress, so you'd need to:

1) limit access to the area where the dog is urinating,

2) give the dog ample opportunity to urinate outdoors (or on wee-wee pads),

3) spray "No-Go" in the area, and most importantly,

4) use hard, vigorous playful exercise and "The Pushing Exercise" to help reduce stress.

Really enjoyed this article. I've never been able to get a good grasp of this behavior but thanks to your explanation it makes perfect sense to me now! :-D

What has fed my confusion is the experience related by Farley Mowatt in Never Cry Wolf regarding his "peeing" contest with a wolf. Putting it in your frame of reference really 'marks' the true understanding for me so I can assimilate it!

I have often questioned the 'Territorial marking" and "pee-mail". However, does the behavior have to be described in cognitve terms. Can a dog be genetically programmed to "mark" without any thought of why he's doing it. Other species are siad to "mark" their territory, is there more evidence to support this behavior in other animals that perhaps "mark" a mile X mile area that they actually live, eat, drink and procreate in? I don't know, I'm just asking. What about animals that enter burning buildings to remove their offspring (cats?). One would have to assume that they have fore thought about the danger of fire to their off spring. When in fact, they are probably just wired to remove them from "threats" safe/unsafe. I get mice nests in my garage, all I do is mess with the nest a bit, touch a few babies and by the next day all the babies are removed by the mother, to some new unknown location? I've been doing this for years and sometimes get to witness the evacuation of babies. Thanks in advance.
TJ

You make some very good points.

However, it seems to me that some of these behaviors lie somewhere between pure instinct and deliberate, mental decision making.

Where does that lead us? That's the question...

I don't know but I love all animal behavior questions and love to ponder all the possibilities.
I suppose if we knew that "marking" was deliberate behavior by the dog, it would help direct us in ways to work with dogs that are said to be "marking" in the house. That's where "marking" VS "unmarking" arguement would be valuable in terms of treatment?
TJ

I've found that once you're able to reduce a dog's anxiety his "marking" behaviors disappear. This suggests that the behavior is neither instinctive nor deliberate.

Thank you for your great essay-- I believe it's important to remind ourselves that domestic dogs are canids with similar but not identical biologies and psychologies to wolves. My prompt to click this site was wonder at dogs who tend to do marking 'competitions.' The mild stress made sense, and the wolf/dog contest seems similar; so, when dogs playfully go back & forth marking over, might one consider it low or mild game-style stress? excitement of play? My boy and another just met today and were friendly and playful--but they did play the peeing game!

I think you've definitely added something to the discussion. It makes a lot of sense.

We've often been told that urine marks are "messages" or "pee mail," or some other higher cognitive form of communication. But the more I look at dogs the more I see them as parts in an information network.

Yes, there's a lot of information passing back and forth when dogs engage in "competitive" peeing, but it's not done from the level of higher cognitive function, linguistic abilities, etc. It's just information feedback and feedforward. It's about getting a feel for the other dog's energy.