Here is another training tip (or five): 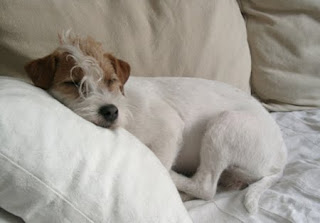 As if the daily stress weren’t bad enough, along comes Muttsy, creating more tension and stress because no matter what you do, he just won’t settle down. Calling Dr. Prozac! And owning a dog is supposed to lower your blood pressure, not raise it.

Before you resort to drugs you should be aware that there are some things you can do that will have a calming effect on your dog without the use of pharmaceuticals. (As the name Natural Dog Training implies, we prefer to solve behavioral problems by restoring the dog to his natural state; our philosophy is that drugs should only be used if there is a definite physiological problem.)
First of all, except when he’s asleep, a dog often attains calmness by being active, not inactive. For him, calmness is not a matter of having little or no energy; it’s a matter of knowing how to use the appropriate energy to respond to a given situation.

Next, it’s tougher for a dog to learn how not to do things than it is for him to learn how to do things, how to take positive action. Kevin Behan writes: “A dog learns to be calm by doing. When his actions consistently lead him to satisfaction, then patience becomes a learned skill.”

Finally, a dog’s behaviors are not controlled by logic, reason, or intellect. They’re controlled by instincts and emotions. Remember, most of your pup’s behaviors would be perfectly normal and natural if he were living in the wild. He becomes excited whenever someone comes into the den, he barks at strange noises, he acts destructive when he’s left alone too long, he scavenges the street looking for food even when he’s not hungry (this is natural in pups, not so much in older dogs), he pulls on the leash on the way to the park. These are all appropriate instinctive responses.

Does this mean you have to accept these behaviors and not try to change them? Not at all; in fact, just the opposite. It means that the first thing to realize when Muttsy does any of the things that cause you tension and stress he isn’t doing it because he’s being bad or willful, or the cri-du-jour, alpha. He’s just being a dog.

What’s the best way to insure calm behavior? Give your dog a job, something to do. Make sure he gets plenty of exercise—at least 20 minutes of hard, vigorous playful activity twice a day, every day.*

1.) Don’t say “No!” Many nervous, hyperactive dogs settle down in just a few days after their owners do nothing more than eliminate the “N” word from their vocabulary. Replace corrections with distractions, followed by praise and play.

2.) Don’t Correct—Redirect! Instead of correcting Muttsy for doing things that come naturally to him, re-direct his energy into a more appropriate activity. Instead of scolding him for jumping up on people when they come over, teach him how to say hello by sitting and giving a paw. Instead of punishing him for pulling on the leash, teach him that it’s fun to walk next to you. The list goes on and on. Replace old, annoying behaviors with positive ones.

3.) Always Reward Calm Behavior. Whenever Muttsy stops exhibiting nervousness and is calm praise him for more than a second or two, praise him and give him an unexpected tidbit. If he pesters you for more treats, ignore him till he’s calm again, and then re-reward him with praise or a ball throw. Also, teach him "The Eyes" exercise.

4.) Play Fetch and Tug-of-War. These games use up a lot of energy in a natural and positive way. Is it raining and Muttsy hasn’t gotten his usual exercise today? Play tug-of-war with him! If your dog won't play tug with you, try doing "The Pushing Exercise" for a few weeks, or until your dog starts bringing you his toys!

5.) Don’t Coddle the Dog. Some dog owners use the dog to satisfy their own emotional need for contact and comfort. This is fine, up to a point. Everybody (or almost everybody) likes to cuddle and pet their favorite poochie. But when a dog is given too much positive attention it distorts his picture of how the world works. He begins to expect to always be paid attention to. And when he isn’t, he gets upset and acts out. So always try to keep an even balance in how much attention your dog gets. And remember:


Dogs need more play time than cuddle time!
*By the way, when you follow the training protocols laid out in Kevin Behan's training book, Natural Dog Training, then, once you get to a certain level with his techniques, you'll find that your dog doesn't need as much exercise or playtime as he used to. His sense of calmness will come just from being with you. (There are two other exercises, "The Pushing Exercise," and "The Eyes," that Kevin developed after the book was published.)
LCK
"Changing the World, One Dog at a Time"
My Psychology Today Blog
Join Me on Facebook!
Follow Me on Twitter!
Join the Dog Trainers Network!
Posted by LCK at 11:07 AM