Here's a comment on my latest Psychology Today blog article, along with my reply. If you haven't already read the article you may still be able to follow most of the arguments put forth here.


Laboratory Learning vs. The Natural Way 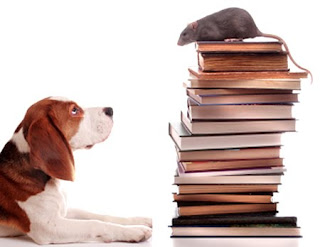 I really don't feel there is a firm grasp of operant (behavioral) conditioning concepts in place here. Getting your dog to stop picking up trash off the ground by praising him is putting that behavior on stimulus control. This is widely used to eliminate unwanted behaviors-you don't ask for it, you don't get it. And I don't think you can call trying something with a few dogs a "theory." That is an insult to the scientific method, quite frankly.

I appreciate dog owners doing their best to be better owners to their dogs, operant conditioning is ALWAYS at play in every interaction you have with not only every dog, but every human you come into contact with. Behavior is constantly being reinforced or punished.

Operant conditioning is postive and negative reinforcement (both which INCREASE behavior), and positive and negative punishment (designed to DECREASE behavior).
These methods are used to train animals of literally nearly every species in captivity from elephants to whales to sharks to turtles to fish to alligators to cats to rabbits to frogs to fish (zoos and aquariums aquire all KINDS of behavior with it), so please do not disregard something proven to be so universally successful as something that may not really work for dogs. I love dogs, but I am sorry to say they are not any more special or unique than any other animal. Don't "dogthropomorphize" behavior when it is simply behavior that is yes, specifc to dogs, but not so unique that the wheel must be reinvented to accomodate it.

I don't think you have a firm grasp of what I've written.

Explain how that applies here.

2) I never said that the use of praise to stop a dog from scavenging was the basis of any theory. If you had read my articles more carefully you'd see that this behavioral shift was only presented as an example of learning that can't be explained through the alpha theory or learning theory.

4) As for your reading list, I've read Skinner. Lots of Skinner. I've also read the Brelands. And sad to say, I went through my own Karen Pryor phase, where I thought operant conditioning was the "one true answer." But the more I applied oc principles to dogs the more I realized that the emperor has no clothes. Perhaps you should read Dennett and Chomsky and Pinsky and John Staddon and Gary Cziko.

5) I understand full well the difference between positive and negative reinforcement. I was explaining my approach to dog training yesterday in Riverside Park to a woman who's been training dogs for 6 years using clickers and positive reinforcement. We were discussing the praise issue mentioned here. She seemed to think that whether you're praising a dog or shouting at him you can still be reinforcing the behavior.

"Though shouting," she said, "would be negative, not positive, reinforcement."

"Actually," I said, "if shouting increased the behavior it would still be considered a positive reinforcement."

She didn't understand; she thought I was making it up.

6) The fact that these methods are used to train captive animals means very little. When we base our understanding of learning on the behaviors of animals in captivity we're only seeing a small, unnatural piece of the pie (which is, unfortunately how Skinner’s theory was first developed, in the lab, with animals kept captive in boxes, not walking around in real life). Captive wolves exhibit hierarchical behaviors, wild wolves don't. Why is that? When captive dolphins, who are designed by nature to swim hundreds of miles a day through open waters, are held prisoner in small (to them) tanks, why wouldn't they be willing to perform all sorts of acrobatics for food, or even for praise? What else are they supposed to do with their energy? Could they be trained to do all those things out in the open ocean? No, because in their natural environment they'd have another outlet for their energy.

7) Finally, you're completely misinterpreting my argument for dogthromorphism. I never said we should dogthropomorphize behaviors, but that instead of anthropomorphizing dogs, we should dogthropomorphize ourselves, meaning we should try to see their behavior from their own unique perspective. It may be true that all animals learn the same way, but that way isn't through operant conditioning; it's through the way emotional energy either flows or gets blocked. The satisfying release of emotion is what reinforces behavior and creates learning. Sometimes operant conditioning imitates that process, sometimes it doesn't. Dogs are the clearest window we have into this phenomenon.

"Changing the World, One Dog at a Time"
My Psychology Today Blog
Join Me on Facebook!
Follow Me on Twitter!
Join the Dog Trainers Network!
Posted by LCK at 8:37 AM

I read your article and found it to be very interesting. We have a 3month old Border Collie and I have been trying to follow your methods. We play tug often, and I also use the praise and distraction method to stop him from doing something unwanted. Thank you for the great articles! If it wasn't for your writing I would be training in the dark!