For various reasons (related to possible future publication), I've deleted most of this blog entry (which was about how Freddie passed away in his sleep on June 28th, 2007), except for the following: 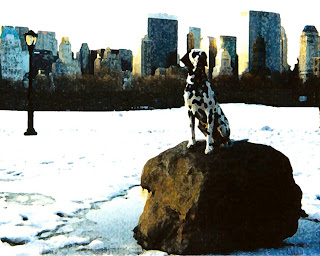 That’s one of the great lessons this beautiful animal taught me: That dogs will always respond to our desires in some way; they can’t help themselves. They don’t know how not to.

Some may read this and think: “That’s not true. You never met my dog!” Others may think, “Well, your dog was special.”

The thing is, though, I have met your dog, or one like him. And to me all dogs are special. In fact, if you follow me and Fred on this journey you’ll see that he was one of the worst-behaved, and seemingly one of the dumbest, most willful, foolish, disobedient, and hardheaded dogs who ever lived. There were times I wanted to murder him. But as the story unfolds, you’ll also see that nearly everything he did, or refused to do, was done out of love for me, and out of a real, biological need all dogs have, one they’re born with, which is to align themselves with the wishes and desires of the people and animals they love. Again, I’m totally serious about this; I’m not spouting some mystical new-age crap. This is purely a matter of biology and physics. Dogs will relentlessly align themselves with your wishes and desires even if you’re totally unaware of what those wishes and desires are! That’s what can be so maddening about this trait of theirs!

I mean, let’s face it, very few of us are cognizant of what we’re wishing for at any given moment. Nor do we always know what we really want or truly desire. Not a single one of us is as in touch with our feelings as we’d like to believe. But our dogs are. To dogs our feelings and desires are as real and as pure and as important to them as the air they breathe.

I’m a dog trainer by profession but I don’t think “obedience” is the right word for what we ask of dogs. Or that “training” is the right word for what we do when we supposedly teach them how to behave. What we do, really, is just facilitate what is natural in them. We give them a chance to do what they were born to do. And it isn’t to “obey” us or to perform tricks. It’s to align themselves with our desires.

And that cuts both ways, too. Dogs are much more obedient to us when we align ourselves with their desires, and their wishes. That’s why some methodologies work better than others. Some of them are more geared toward that particular goal.

At any rate, Freddie taught me a lot in his 15+ years on earth, but that’s probably the most important thing of all. That through all the scrapes he got himself into, and despite all his foolishness and daredevil exploits and occasional maddening mealtime persnicketiness, he taught me that no matter what dogs do, no matter what kind of dumbass shit they pull, no matter how crazy their behavior, or how insane it makes us, they’re essentially doing it for our benefit. They know, or I should say they feel, that we can be better human beings if we would just listen to what they’re trying to tell us with their behavior. And when we do listen, miracles—like the one that took place during Freddie's last night on earth—happen. Dogs are miraculous creatures after all.

And the funny thing is, dogs never wrong.
LCK
"Changing the World, One Dog at a Time"
My Psychology Today Blog
Join Me on Facebook!
Follow Me on Twitter!
Join the Dog Trainers Network!
Posted by LCK at 7:58 AM

What a beautiful piece Lee, well done. And, of course you are right.

I wish I could have met Freddie... He sounds like a real trip. Looking forward to the book. Write faster!

I am beginning to understand what it means to let Summer "talk" to me... For a while I was so tied to the training methods and while I DID tweak them some to fit her personality, I don't think I was REALLY listening to her. I've been trying to read her better and I think I'm getting it. A big part of it I believe is her own homeopathic treatment for her chronic issues. It's as if the real Summer was trapped behind a chronic disease haze, and now that her body is slowly swinging back into balance, she's able to show her true self more.

I like that: "The real Summer was trapped." That's one of the things Freddie taught me (with Kevin Behan's book as a foundation), that dogs really, really want to be free and happy and unfettered, and that training is mainly about finding a way to facilitate those natural doggie desires and energies.

Lee, I've been rereading Kevin's book again (third read!) and I'm getting more out of it even now... Isn't it amazing?

Yesterday in Prospect Park, we were playing tug in the middle of the long meadow. We play a version of tug where I ask her to Out, then Down, and from the down, on a Get It command, she is allowed to literally fly up and grab the tug which I hold head high. I threw in obedience commands all over the place, and she not only responded with pitch perfect precision, but she looked so loose and happy and powerful and drivey all at once. It was like she was laughing the whole time. You can't miss that energy and emotion - I saw people smiling and pointing at us. At some point I was sitting down and Summer was laying on my left side, her head over my shoulder nuzzling me, and some random dude said, "Wow, she really loves you, she looks so happy."

I never would have gotten that from her in a million years, if I didn't have you help us and recommend Kevin's book to me. Summer HAS indeed made me, and continues to make me, more mindful of how I live my life, and the kind of person I want to be.

It's true: Kevin's book is always surprisingly accurate and still ahead of its time (for the most part), even 16 or 17 years after it came out.

I'm always amazed that some of the scientific breakthroughs in the last 10 years or so, and even some of the things I thought I'd discovered for myself, all actually came originally from Kevin's pen.

What a moving piece, Lee...thank you for sharing. I had a similar experience with my last GSD who stayed alive for my benefit until I could let her go (she was also 15+). She came to me in my dreams, young and healthy, as if to say, "See, I'm ok and you will be, too." I believe she sent me Roman cuz she knew I could not be without a dog.

I love what you said about dogs aligning themselves with the desires of those they love (and that we should do the same).

Roman got into a fight the other day. He had bounced up happily to another GSD on a trail and the dog just went for him. This dog's people were screaming and in complete freak out. Their dog was much bigger. I was not about to get in the middle of it and I had to let Roman defend himself but I mentally told him "come to me as soon as you can"...I could tell he did not want to fight this dog and was trying to get away towards me. The other owner was trying to grab his dog around the middle and I told him not to since he could get bitten...but he didn't listen.

There was a second break and Roman came to me and did a sit stay on my hand signal while I checked him for bite wounds. He was fine. The other dog was in his owner's arms, lunging and in quite a state. The wife was still yelling.

It was such a weird almost, mystical, experience because I did not panic despite the ferocity of the scene playing out in front of me and the danger my dog was in.

After it was over and the people went on their way, stressed out, Roman slotted in next to me and we continued our walk, enjoying the peacefulness of the nature trail. Neither of us were traumatized and I felt so in sync with him. Weird.

Thanks for sharing such a meaningful story (and part of yourself).

I read a not-well but interesting book, PAWS AND AFFECT, on a plane last month. It discusses a little about the evolution of wolf-to-dog, how recent it is and how quickly it happened -- precisely because of that desire to be with us inept humans.

It's been a summer of dog deaths in Brooklyn Heights, at least five that I know of. Today I got a message that one of the dogs I walk, an ill-tempered (read: scared witless) Lab/terrier mix, is moving to Long Island and I lost it. I'd sympathized with friends over their grief but broke down, finally, at the loss of this 25-pound hazard that includes me in the three people he will allow to touch him.

Our dogs get humans; we earn our dogs -- and we only earn them when we've earned their trust.

It's the rarest thing in the world, that complete trust and complete ownership a dog has for and of us.

Can I stop crying now?

Don't ask ME when it's okay, or time, or appropriate to stop crying. That's one lesson Freddie hasn't been able to teach me yet.