This article was originally posted on my blog at PsychologyToday.com. 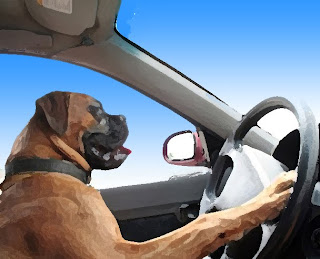 I don't own a cell phone. I used to, but discovered that, for me at least, it was more of an inconvenience than anything else. Now that I'm no longer talking on my cell phone, I've noticed that whenever I pass by someone who is, I usually hear one of two things: "Where are you?" or "I'm [at such-and-such a location]." True, these conversations may go on to other topics, but that's how most of them start. That's one reason it becomes clearer each day that human beings have a deep biological need to feel connected to one another, almost to the point that on some level we feel actually, physically lost without such contacts.

I think dogs are the same way. They're not as neurotic about this deep need as some cell phone users seem to be, but they do have a strong biological need to feel connected to us.

Every so often you'll hear a story in the news about a dog who gets lost, and then then miraculously, against all odds, travels long distances to find his way home. Whether it's an Airedale named Max who got lost in Connecticut, 45-miles away from his home in Rhode Island, and was found hanging out in his own back yard three weeks later, or Jarvis, a Jack Russell terrier from Devon, England, who got lost on a family outing, and made his way home by hopping a ferry across the Plymouth Sound, it's hard to know how they got to where they were going. In rare cases dogs have even managed to do this while the family was in the process of moving; yet the dog still shows up at their new front door months later, tired and hungry, and wagging its tail.

How does this happen? What kind of GPS system do they use?

I was researching data on the mechanisms that homing pigeons and monarch butterflies use when finding their way home (or navigating), and discovered that, so far, science only has some educated guesses as to how those things happen. For pigeons one theory is that they operate by magnetoception, the ability to "tune-in" to changes in the earth's magnetic field. For monarch butterfiles, who travel every year from Canada and the northern United States to Mexico (and then back), their flight patterns are reportedly, "inherited." This makes sense because the individual butterflies that leave for Mexico are three generations removed from the ones that actually arrive. This means that those that eventually return north each year are at least six generations removed from the ones that started the journey. And since their flight patterns are very exact, those patterns would almost have to be encoded into each butterfly's DNA. But how do group memories get stored in an individual's DNA? Or do they?

As I thought about this, I realized that dogs might find their way home in similar fashion to some experiences I had when I was in college. I didn't get lost, but somehow, against all odds, I found my way from Point A to an unknown, yet very desirable Point B, with only my emotions to guide me.

The first time this happened, I was totally enamored with a girl named Pat Smith. We'd bumped into each other a few times on campus and I'd felt an instant attraction for her. (She reminded me of a young Ingrid Bergman.) I was too shy and love struck to be of any use to her or myself the first time we met. The second time, I was a bit more relaxed. After she laughed at a couple of my jokes, I got up the nerve to ask for her phone number, and she gave it to me.

Then I asked her where she lived, meaning on or off campus. She told me the name of the street she lived on, but couldn't remember the address; she was "bad with numbers."

I called her later that evening and found out she'd given me the wrong phone number. (She really was bad with numbers.)

I couldn't stop thinking about her, though. I had to see her again. But how? I could let the days drag by on their own, and hope that I might run into her again somewhere, somehow. But that seemed much too slippery and intangible, not to mention contingent on happenstance.

I told my roommate, Mark, about her, hoping he might have a solution, or maybe talk me down from the romantic ledge I was putting myself on. It didn't help.

Finally, one evening, I decided to take action. My car wasn't working, so when Mark picked me up after my shift at the local radio station, where I was a DJ, I asked if he'd mind driving me to this girl's house.

"You found out where she lives?"

"No, I just know it's a house on Seventh North."

"That's a big street with a lot of houses."

"I know. I just have this feeling that I'll know which one is hers."

Mark, who'd had his own share of romantic obsessions, said. "Okay, but keep it short. I want to get to the record store before it closes."

So we drove, Mark shaking his head, me staring intently at all the houses we passed by. After several blocks I said, "Pull over here."

He pulled over. I got out. He looked at his watch.

He shook his head. "I'll keep the motor running."

I made my way up to the front door, feeling foolish and stupid and vulnerable, yet driven to find out if this was the house with the potentially wonderful girl living in it. I knocked.

A moment later the door opened. It was a college girl, but not the one I was hoping to see. Mark was right; this might take all night.

The girl gave me a funny look, then said, "Yes. But she's not home."

After a brief conversation - in which Pat's roommate gave me the correct phone number (two of the digits had been reversed), and promised to tell her I'd dropped by - I went back out to the car and Mark and I went to the record store, shaking our heads in wonder.

Now, you might be thinking so what? What does that tell us about how dogs are able to find their way home when they get lost?

Well, first of all, that's not the only time I've done something like that. I once had a crush on another girl who told me that she'd be going to concert, that had been sold-out. I went to the venue anyway and stood at the entrance, hoping I'd bump into someone with an extra ticket. After a while the girl I liked and a group of her friends showed up. (This isn't the good part; I knew she'd probably be showing up there.) We chatted, I explained my ticketless state, and they said, "Oh, too bad..." and the like. But as we were talking another group of her friends came by, and one of them actually had an extra ticket.

So I was not only able to get into the concert, I was able to sit right next to the girl I liked.

Here's the reason I've shared these stories: they're not extraordinary. We all do things like this, or at least similar to this, every day. We become filled with a strong desire to connect to something - a potential mate, a job, a new place to live, a hard-to-find article of clothing, a concert ticket - and that desire creates a kind of "magical" connection between us and the thing we want.

However, I don't believe it's magical at all. I believe that in order for that connection to take place, there probably has to be some kind of natural energy field - call it emotional , bioenergetic, cardio-magnetic, or morphogenetic - that enables us (and dogs) to plug our internal GPS systems in and follow where it leads us. This may sound "new-agey," and perhaps it is. But the mere fact that this article started with an observation about cell phones kind of indicates that we're actually living in a new age, at least where science and technology are concerned.

So it seems to me that when a dog is lost and wants to find his way home, he's not remembering his route, or navigating by certain signposts, or thinking about what he's doing. If he did, he wouldn't get anywhere, just as I wasn't getting any closer to the girl I wanted to see by constantly thinking about her. No, a dog has to go by feeling his way. And if his drive to connect is strong enough, he'll get home simply by going where the bioenergetic (or emotional or magnetic or morphogenetic) field resonates most intensely with his desire.

A part of this process is perfectly illustrated in an Ikea commercial showing right now on TV. In it a married couple come home from vacation and fall, face first, onto their bed - first the wife, then the husband - and talk to it, telling it how much they missed it while they were away.

For most of us, home is a place of strong emotional resonance. If we were to chart our daily movements, home would be the center, with all other locations - work, the supermarket, the movies, a friend's house, the kids' schools - acting as satellites. It's as if "home" has its own emotional gravity, and so we find ourselves orbiting around and then being pulled back to it day in and day out. The more positive experiences we have with being there - comfort, rest, the satisfaction of eating and drinking, feelings of love and affection, feeling connected - the more those things would displace our own energy fields, creating a kind of emotional tide that constantly, yet subtly, pulls us homeward.

If home and family have any kind of emotional resonance for dogs - and I'm pretty sure they do - then it's those properties that displace the lost dog and pull him in one direction not another, just as I felt myself being pulled directly toward one house, and one house only, because that's where the person I most wanted to see and talk to lived. And if I was able to do it just because of a passing crush, imagine how much simpler it would be for a dog who's lost the people who mean the most to him. After all, there's a great deal of truth to the homily that "home is where the heart is," and of all God's creatures, dogs may be the ones with the most "heart."

So it's really no wonder that a lost dog would be able to find his way home. He's just doing what dogs do when hunting for a favorite toy. Only in this case the are stakes higher: he's trying to find a missing piece of his heart.

LCK
"Changing the World, One Dog at a Time"
My Psychology Today Blog
Join Me on Facebook!
Follow Me on Twitter!
Join the Dog Trainers Network!
Posted by LCK at 9:25 AM

Once my neighbours's dog got lost. I had a strong connection to this dog and when I found out she had already been lost for three days. So I went into a quiet room and connected to her on an emotional level and "told " her how to get back hope and "showed " her some sign posts along the way. The next morning she showed up and when I went to see her she ran over and flung herself at me in joy....something she had never done before because she was a very shy dog. It was a very cool experience.