The following is taken from my column at PsychologyToday.com. 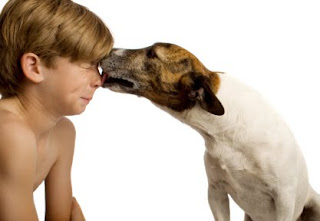 They're sublimating their urge to bite.

In the Mike Nichols film, Wolf, Will Randall, a meek, downtrodden book editor (played by Jack Nicholson), is bitten by a wolf one winter night and finds himself becoming more and more in tune with his primal nature. He can smell things like tequila on a co-worker's breath from clear across the building. He can hear people talking from several floors away. He can read and edit whole manuscripts without his reading glasses.

Worried that the changes he's experiencing may have also caused a nocturnal blackout, Randall goes to see Dr. Alezais, an expert in animal lore. Toward the end of the interview the aging Dr. Alezais reveals that he's been told that he's dying. However, he thinks that if Will Randall were to bite him, he might become strong like the wolf and live forever.

"I can't ask you to transform me with your passions," Alezais says.

"I can only ask you to honor me with your bite."

My dog Freddie was punished for biting when he was a puppy. This created some behavioral problems later on (severe panic attacks) that took me a while to unravel. However, once I did, I observed a funny, and very sweet side-effect to the new emotional freedom he felt once his fears were gone. Before that, whenever we came home from our walks, he would wait at the top of the first landing, and as I came up and got close to him, he would lick my nose in a kind of ... what, a "submissive greeting?" Perhaps, though he really wasn't the submissive type.
But oddly enough, once I'd helped him resolve his fears, whenever we came home and I got near the top of the landing, instead of licking me he'd slowly incline his head toward mine and use his front teeth to lightly pinch the tip of my nose. The experience was thrilling; it often gave me goose bumps. He used his teeth so gently and so precisely, it felt to me as if he was re-establishing an emotional connection between us that had previously been lost.

Wolves make a living with their teeth. Predators aren't designed to be social animals because their urge to bite has to be kept under lock and key around other members of their group, otherwise there'd be bloodshed. And yet wolves are very social; they live together in almost complete harmony and are extremely cooperative when hunting. They even have the ability to share food, eating side-by-side, once their prey has been killed. This is pretty remarkable given the Darwinian view of nature as a cut-throat enterprise, even among members of the same animal group.

To me, all canine behavior is essentially a process of tension and release. When emotional energy builds up in a dog's system, it creates tension which then needs to find a release point through behavior. For wolves the most complete and most satisfying release of tension comes either through biting prey (during the hunt) or copulating (during mating season). In other words nearly everything a wolf does is a sublimation of his urge to bite (his prey drive), or his urge to mate (his sex drive).

One way of sublimating the urge to bite is "submissive" licking, commonly thought to be how a wolf appeases a more "dominant" pack member. But a) dominant and submissive behaviors are so rare in wild wolf packs as to be virtually non-existent, and b) if a wolf's emotional energy is geared to always be expressed primarily through biting, and c) if he also wants to maintain pack harmony at all costs, he may very well lick his pack mate's lips or chin, instead of biting them.

It's been suggested (I think by Desmond Morris) that when dogs kiss us (which is anthropomorphic, since a kiss involves puckering the lips, and a dog's lips don't pucker), they do so because that's how wolf pups get their parents to regurgitate a meal when they come back to the den.

This doesn't make sense to me. It's like taking a decal from one behavior and sticking it onto another. Dogs are very practical and context-oriented. It would be very unusual for a dog to take a behavior specifically related to her parents, and somehow apply it to human beings. For one thing dogs move through space on the horizontal axis. Humans are vertical. There's no way a dog could mistake a human being for another dog. Also, dogs don't just lick our lips, they lick our noses, our ears, our hands and feet. And the more stressed a dog is, the more he tends to lick. Plus dogs lick us a lot more when they're puppies than they do when they're adults. Why? Puppies feel a lot more oral tension than adult dogs do.

There's one more thing to consider. When humans smile it's considered a signal of good will. But to a chimpanzee a smile communicates fear. Similarly, when a puppy sees your big human head coming toward him, a part of him reacts with fear, and that part wants to bite you. But unlike wolves, dogs make their living with their hearts, not their teeth. They have strong feelings of love and affection for their owners. Plus, they retain the genetic knack of maintaining group harmony at all costs. So when your dog sees you come leaning in for a kiss, he sublimates his urge to bite, and licks you instead. Then, over time, as he accrues more and more feelings of trust on top of the love he already feels, he finds that licking you actually feels good, not just because it releases his nervous tension, but also because of how it makes you feel. (Our feelings are very important to our dogs; they're like the sails and rudders they use to navigate their way through their relationships with us.)

That's the simple, dog-centric genesis of why dogs lick us: it's a way of sublimating their urge to bite. That's why Freddie licked me when I reached the top of the stairs, back before his fears of being punished for biting went away. It's also why he replaced the less satisfying release he got from licking me, and started giving me those tender little love bites on the tip of my nose. He finally felt free enough to share a tiny bit of his deepest and most primal nature with me.
He honored me with his bite.

"Changing the World, One Dog at a Time"
My Psychology Today Blog
Join Me on Facebook!
Follow Me on Twitter!
Join the Dog Trainers Network!
Posted by LCK at 11:39 AM 3 comments: