Originally published in slightly different form at PsychologyToday.com on January 1, 2013 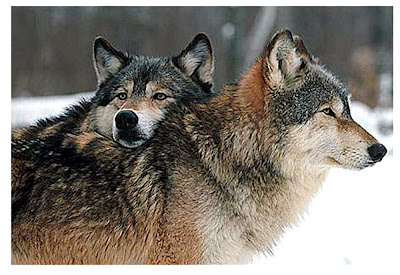 Competition vs. Cooperation
Dr. Marc Bekoff recently wrote an arcticle here at Psychology Today stating, in no uncertain terms, that dominance hierarchies are real. He backed this up by saying that this is the current scientific consensus.

I’m not denying that the consensus exists. But it seems to me that we may have been seeing this issue backwards. The members of a wolf pack are not in competition over resources, nor are they seeking biological advantages over one another. The pack is actually about pooling resources, sharing them—not about fighting over them.

Here I’ll give 3 very simple, very clear and specific reasons for why I believe that dogs and wolves do not form dominance hierarchies.

1) Dominance = A Vertical Chain of Command
It seems to me that a true dominance hierarchy is a top-down system with a clear and invariable vertical chain of command. Examples in human society are the military, educational systems, and families. [1]

In animal groups the deciding factor of who’s dominant is reportedly about who controls access to resources: food, water, the best place to sleep, mating opportunities, etc. Yet none of the human systems I mentioned above are about controlling access to resources; they’re about enforcing obedience to authority. If a soldier, student or child disobeys, there are clear consequences. But in canine packs and multiple-dog households, if a supposedly subordinate animal has possession of a bone or a toy, he or she is often allowed to keep it despite the fact that the more dominant dog may also want it. There is no clear, vertical chain of command.

Dr. Bekoff has observed this himself: “Complicating the picture is the phenomenon of situational dominance. For example, a low ranking individual may be able to keep possession of food even when challenged by another individual who actively dominates him or her in other contexts. I've seen this in wild coyotes, dogs, other mammals, and various birds. In these cases possession is what counts.”

Situational dominance? Possession is what counts? From what I understand these ideas simply do not gibe with the definition of a top-down system.

2) Dominant and Submissive Labels Are Meaningless
In his book Dog Language, Dr. Roger Abrantes explains how to tell if one member of the pack is feeling or acting dominant he “will make its body appear large and stiff.”

But is this specific form of body language is always consistent with dominance? If, for example, a dog or wolf wins or controls access to resources by acting in a “submissive” rather than a “dominant” manner, wouldn't that animal then be, by definition, dominant?

One example is the conflicts that seem to arise between a breeding pair over how to “disburse food to the young.”

This typically starts when the breeding male brings a dead animal such as a hare back to the den where the female is waiting with her pups. She comes out of the den. The male stands tall and stiff. The female starts to crouch low to the ground, but keeps coming toward him.

The closer she comes the more “dominant” his posture becomes.

This continues until the female, nearly rolling over on her back, snatches the dead animal—the “resource”—right out of the male’s jaws while he just stands there, frozen.

Who’s most dominant here? Obviously the female; she clearly gains total and complete control of an important resource. Yet her posture is defined as “submissive” while the male’s is defined as “dominant,” even though he’s the loser! [2]

It seems to me that the words we attach to these postures should always relate to an animal’s “rank and status” in any given situation, under any and all conditions and circumstances.

3) Female vs. Male Perspectives
In canids, group formation is a function of prey size. According to Ray Coppinger, wolves who settle near garbage dumps don’t form packs. Coyotes, who are usually solitary, will form packs when small prey is scarce. Etc., etc.

Since dominance is supposedly about conflicts over who controls access to resources, and since the primary resources for wolf packs are large prey animals, if the pack is a dominance hierarchy we should see constant conflicts over access to the prey animal. Yet hunting seems to be a cohesive, cooperative effort on the part of all pack members. Even when the animal has been killed, no wolf always eats first.

If wolves actively cooperate and consistently share resources, then why has science focused so much attention on so-called dominance?

The problem may have something to do with gender perception or what I would call sexual semiotics: it's been shown that male researchers often tend to focus their attention on agonistic behaviors while female researchers are more interested in affiliative behaviors. [3]

In the 1960s, for instance, when Thelma Rowell studied the baboons in Uganda, the accepted idea was that they lived in a clear male dominance hierarchy, were extremely competitive, and were constantly fighting over food and females.

We know that social friction exists in dogs and wolves. But is it really dominance? I'm no scientist, but I think that's a legitimate question.

Granted, the “data are there,” meaning that the dominance model has plenty of statistical numbers to back it up. The problem—if there is one—may be that statistics are often dependent on which behaviors the observer deems relevant, which may bring us back to sexual semiotics.

Thelma Rowell writes, “A zoologist … must always return to the question of selective advantages. … It is so very obvious that monkeys enjoy being together that we take it for granted. But pleasure, like every other phenomenon in life, is subject to, and the result of, evolutionary pressure—we enjoy a thing because our ancestors survived better and left more viable offspring than their relations who did not enjoy (and so seek) comparable stimuli.” (Haraway, 1978, p. 51.)

Following this line of reasoning—and operating on the principle that the wolf pack’s primary function is to hunt large, dangerous prey—what’s more important or more likely for success? A social structure built on dominance, aggression, and fear? Or one built on the pleasure of being in one another’s company, snuggling up when it’s cold, licking each other’s fur, playing with each other when you feel like it, all of which, over time, create feelings of harmony and cohesion rather than tension and divisiveness? The pack would still exhibit the same structure, it would just be an affiliative heterarchy not a dominance hierarchy.[4]

Would wolves define themselves by the occasional flare-ups that take place when environmental stressors increase social friction, or by the constant internal emotional pull they feel for the simple pleasure of being in one another’s company?

It's impossible to say. However, as a dog trainer my observations suggest that dogs would prefer to live in harmony with us, and with one another. I also know that in dogs, dominance is often a symptom of anxiety. When you reduce a dog’s anxiety, whatever dominance tendencies that dog had, simply disappear.

1) In her book Primate Paradigms: Sex Roles and Social Bonds, Linda Marie Fedigan defines a linear dominance hierarchy as “a straight-line rank ordering of animals drawn up by the researcher according to what the researcher perceives to be an animal’s relative abilities to intimidate, obstruct or control another’s bodily movements and thus win such conflicts or use resources first.” (94)

2) Some might argue that in wolf packs males perceive females as a resource rather than as rivals, so they make pains not to exert dominance over them, only over other males, but if that’s the case, then dominance isn’t a social behavior but a sexual one, a topic for another discussion at another time.

3) "Numerous observers among primatologists and science studies scholars have suggested that women observed differently. For some, women's patience makes them ideal observers." ("Culture and Gender Do Not Dissolve Into How Scientists 'Read' Nature: Thelma Rowell's Heterodoxy," Vinciane Despret, Dept of Philosophy, University of Liège, Belgium; 2009, p.

4) As its name implies a heterarchy derives its structure comes from differences in temperament. Following this idea, some pack members would be seen not as more dominant, necessarily, but more direct, while others aren't necessarily submissive, they would just have a tendency to be indirect. These variations of the direct and indirect approach to others may very well be necessary for the pack to succeed during the hunt.