I’ve been wanting to supply a simple trick or two to getting dogs with “no prey drive” jazzed up and starting to act drivey, for those dog owners who need that kind of help, and I dug into the archives and found this. . 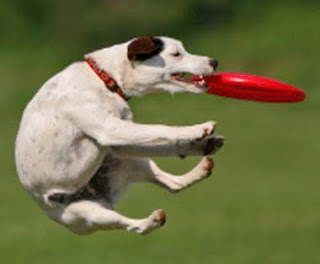 One problem some dog owners have is the dog who won't play fetch or tug. Doing the pushing exercise with such a dog will usually, over time, create more of an inclination in the dog to engage in play with her owners. However, sometimes it’s a little improvisation, a simple change of plan that can bring a dog’s drive to the surface.

For example, if your dog is hesitant about playing with balls or toys, but loves biscuits, try using them as prey objects. Some might worry that this will set a pattern that’ll interfere with the dog bringing the toy back. Don’t worry, the first goal is to get the dog to love chasing something. Remember, that’s already part of his DNA. Once he has fun repeatedly chasing a biscuit or piece of chicken (or a broccoli floret), you’ve opened up a channel to it, you’ve re-awakened behaviors that have been slumbering. Then you can slowly introduce him to the idea of chasing a ball instead of a piece of food. After all, while there's no reason to bring a biscuit back, there's a very good reason to bring the ball back for another game. (If your dog won't bring the ball back, you can use the two-ball trick: tease him with a second ball until he drops the first one, then throw the second one for him to chase.)

You could also switch the game around a little, and instead of just tossing the food object, you could tease him with it and run away, get him to chase you first, and then toss it a few feet. Then one day, a few days or a few weeks later (depending on how hard it is initially to motivate your dog to play outdoors), when you think he’s ready, substitute a tennis ball as the focal point of the chase me game, and when you can see that he’s crazy to catch you and maybe even nip at you in play, get him to focus his urge to bite onto the ball, then toss it a few feet. You need to start him off with very short throws initially. (This is especially true of puppies and tracking breeds, like bloodhounds.) It doesn’t even have to be a ball, either; it can be his favorite toy. The idea is to increase his desire for something he already has a smidgen of desire for, then get him to chase it.

If you're trying to get the dog to play tug outdoors, playing "Chase Me!" works even better. Remember, the simple act of chasing automatically stimulates a dog's urge to bite.

Here's how to play "Chase Me!" Use a prey object of some kind, preferably something that sparks some desire in her. If a toy doesn't do that for now, use food instead.

1) Tease her with the prey object and invite her to jump up on you to get it.

2) Before she can make contact with her front paws, run away, laughing and praising her.

4) Let her catch you, and reward her with the treat or the toy. If it's a toy, and she's had fun chasing you, she should be ready to bite into it. Let her bite the toy, play a very quick game of tug, and let her win and praise her enthusiastically for winning.

5) Always quit before she gets tired or bored.

How can you tell if it's time to quit? If, after you let her win at tug (or throw the ball, if you're playing fetch), and she brings the toy back to you immediately for another game, that means she's still in a group mood and that she still wants to play. If she hesitates (or doesn't bring the ball straight back to you, or if she brings the ball back in a curved, not a straight, path), that means she's slipping back into a solo mood. Don't try to keep playing, or try to push her back into the group mood. Wait a few minutes, or do some pushing for food, then start at step one, and get her to chase you again, etc.

Remember, you should always quit playing before the dog gets bored or tired of the game.

Sorry to hear about your flu, and I hope you're feeling better.

Great article about pushing - and about the importance of improvisation in the initial stages of working with a dog who's having trouble getting into the game.

As for the whole "interfering with fetching" question - I always remind people that the best fetch will come when THEY are the most interesting thing (i.e. the most prey-like) in their dog's world. It's through pushing and the games that you're describing that they will become just that.

Yeah, I'm fine. I've been extremely busy. And it turns out that I've been a little anemic, so I was low in energy for the past month.