Here’s another old Amazon post to add to my treasure trove of essays on canine behavior:

Do Dogs Purposely Use Their Body Language
to Communicate Their Thoughts and Feelings? 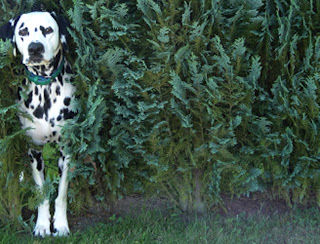 If dogs use their body language to communicate,
why are they also incapable of hiding their feelings?
There are three ways in which dogs are said to communicate with other dogs, as well as with human beings; through their body language, vocalizations, and direct eye contact. The question is, are dogs capable of forming the intent to communicate, or do they do it unconsciously?
Let’s take a look at the communication process itself, so we may better understand what is and isn’t communication. I think we need to differentiate—as Daniel C. Dennett does in Consciousness Explained—between the two types or forms of communication; 1) intentionally reporting information and 2) unconsciously expressing an emotion.
Suppose you see a cat waiting by the refrigerator and you say, “The cat wants his supper.” This expresses your belief that the cat wants his supper. In expressing your belief, you are reporting what you take to be a fact about the cat. In this case, you’re reporting the cat’s desire. It’s important to note you’re not reporting your belief or expressing the cat’s desire. The cat is expressing his desire by standing by the refrigerator and you use it as the basis for your report. There are many ways of expressing a mental [or emotional] state, but only one way of reporting one, and that is by [using language].
In this analysis of the distinction between expressing an emotion (which may be done either consciously or unconsciously) and of using language to report information, (which can only be done with conscious intent) we see what many dog owners mean when they say that their dogs can communicate. Yes, dogs are certainly capable of expressing their emotions. But are they capable of intentionally reporting information?
In the strictest sense, this type of communication—reporting information—only takes place when one individual uses some form of language—either written, spoken, or signed—to intentionally transmit information to the mind or consciousness of another, with the expectation that the second individual is capable of receiving and understanding that information. A dog is unable to form such an expectation because it requires an awareness of the other’s mental capacity, which is an awareness dogs don’t have.
There are times, however, when a dog does seem able to form an intent to convey information. A pup who carries his bowl into the living room seems to be telling his owner that he’s hungry. Likewise, a dog who drops his leash into your lap seems to be reporting his need for a walk. But when we humans look at these situations, we do so with a linguistic bent. Our understanding of them is tainted by our reliance on words. Since dogs are unable to use words, their experience has to be radically different from ours. Once we understand this we can see that these dogs aren’t trying to report anything to their owners—that is to make the owner understand something—they’re simply expressing an emotion, which is done to make the owner do something (provide the dog with food or exercise) or to get the owner to feel something (the dog’s desire for these things). It’s not a linguistic thought process at all; it’s a purely emotional or behavioral one.
Now let’s take a look at the belief that dogs communicate through body language. Is this true?

I don’t think so. For instance, I’ve always felt that if my dog Freddie could keep from wagging his tail in situations where it would be advantageous for him to hide his feelings, he’d do it. But he can’t.
“Why does a dog wag his tail?” goes the old saying. “Because if the tail were smarter it would wag the dog.” In the case of canine body language, the tail is smarter than the dog.
Still, we’ve all been taught that a dog will produce certain postures in order to communicate with others. But once we realize that body language—even with humans—is almost always done unconsciously, without the slightest intent to convey information, we have to see that this may not be true.
Let’s look at one example of human body language: A young woman comes to a party where she doesn’t know anyone. She stands in the doorway, adjusting her clothing, twirling a ring on one finger, looking around nervously. Her body movements are sharp and quick. Does she do any of these things to communicate with others at the party? To tell them that she’s nervous and ill at ease? Probably not. They’re unconscious expressions of emotion.
Now let’s look at this same woman an hour later. She’s met an interesting young man and has engaged him in conversation. She smiles at him, flips her hair back from time to time, touches his arm as she talks. This is also body language, correct? Yes, but it’s also something more. Here she’s using body language to give off sexual signals. She uses her body language, at least partially, as a means of reporting to the young man that she’s interested in him. However, the only thing that other people at the party can see is an unconscious expression of her emotions—she’s not reporting anything to them.
So we have to be careful about how we look at a dog’s body language and ask ourselves “is the dog displaying the body language as a way of intentionally reporting information, or is it done as an unconscious expression of emotion?”
For instance, the most common explanation for the posture where the dog holds himself low to the ground, with his tail and ears down, is that he’s communicating fear. But is he? To me, a dog who does this isn’t communicating anything—not intentionally. He’s experiencing fear, so his tail goes down. It’s simply a reflex, designed to protect his genitals and possibly to mask his scent. He doesn’t do it with the intention of protecting his genitals or of masking his scent, either. It’s an automatic, unconscious reflex—nothing more.
Likewise, when a dog “bares his teeth” he’s thought to be communicating aggression and warning you to stay away. However, once again the dog is not intentionally communicating anything, nor is he warning you, or even “baring his teeth.” He’s feeling aggression, which causes the bite reflex to come to the surface. When a dog has a strong urge to bite, the lips curl back involuntarily to get them out of the way of his teeth so he won’t bite into his own flesh if he has to bite his foe or a prey animal.
My own dog bares his teeth when he settles down with a bone. Does he do this to communicate to the bone? Hardly. It’s a purely instinctive reflex. In fact, a dog who feels a strong urge to bite will bare his teeth even if he’s facing away from his intended victim (or vice versa).
My Dalmatian Freddie and I met a dog one day who’d been bitten by another Dalmatian when he was a puppy, so he took an instant dislike to Fred and began barking and lunging at him. Then the oddest thing happened: Freddie turned his back, and the other dog stopped barking and instead bared his teeth—even though Freddie could no longer see him. Why would you use a facial expression to communicate with someone who clearly can’t see your face? The reason the dog switched from barking and lunging to baring his teeth as soon as Freddie turned his back is that, by turning away, Freddie was more vulnerable. This stimulated the dog’s bite reflex to a higher level, so his lips curled back involuntarily.
And you should see the display of teeth when many dogs play! Are they communicating aggressive intent to one another when they "“bare their teeth?” No. Biting, in some form, is part of their play vocabulary, so the stronger that feeling of wanting to bite, the more their lips draw back automatically, even in play.
So, if we stop and think about it from the dog’s point of view, with a clear understanding of their cognitive abilities, we would see that body language is not an intentional form of communication, at least for dogs. Still, understanding body language is a valuable tool for learning what a dog is feeling. The mistake comes in thinking that the dog has the conscious intent to communicate those feelings to.
LCK
"Changing the World, One Dog at a Time"
My Psychology Today Blog
Join Me on Facebook!
Follow Me on Twitter!
Join the Dog Trainers Network!
Posted by LCK at 11:17 AM