Tuning In to Your Dog's Emotions

Something that came up in the comments section today made me realize this topic is one I haven’t discussed here. And I think it’s pretty cool, and kind of important.


Tuning In to Your Dog’s Emotions 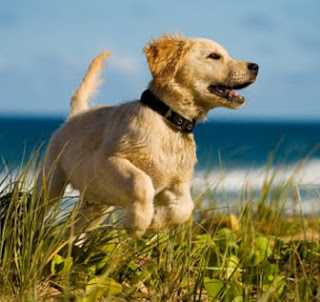 One of the most important aspects of dog training—and it’s one I personally think gets overlooked far too often—is developing the ability to tune into your dog’s emotional wavelength.

What do I mean by this, exactly?

It’s pretty simple. Whenever your dog is doing something that stirs up positive emotions in him, even on a minor scale, you simply pretend that you feel the same way about whatever he’s doing or experiencing. It has to be something that’s not too disgusting, of course. You don’t want to make him feel that you share his feelings about raiding the litter box for some tasty “kitty fudge,” for example. But if he’s happily chewing a bone, though, you might say, “Oh, is that a GOOD BONE? Is that a good TASTY bone? Ooh, you LOVE your bone!”

You have to say it in such a way that he doesn’t feel like you’re interested in the bone yourself, of course, just that you share his feelings for it.

Another great example is when a dog is out for a walk and he “gets stuck” on a smell. We all have agendas in these situations. Our agenda might be to get somewhere, even if it’s the same general agenda our dog has: to get to the dog run or to the park. But when a dog stops walking and keeps sniffing and sniffing and SNIFFING the same damn spot and won’t move, our tendency is to tell him to knock if off and get him to keep walking.

My dog Fred was doing this one day, sniffing the same spot over and over. And that’s when I discovered this simple secret about dog training. At the time I had decided, as an experiment, to do things backwards to the way I would normally do them, or the opposite to what all the training books say, just to see what would happen. So instead of pulling Freddie away from this “wonderful” smell and getting him to continue our walk, I said, “What do you SMELL?” in an excited tone of voice.

He wagged his tail.

He wagged his tail harder.

“Oh, Freddie! You’re such a GOOD SNIFFINGdog! You’re the best sniffing dog in the WORLD!”

Strangely enough, he decided he’d had enough of that smell and we continued on our walk. (I still use this technique with all of the dogs I work with; it works every time...)

I soon began incorporating this concept into a lot of the little things Freddie did. When he woke up from a nap, for instance, and began to stretch I would stretch my own muscles a bit too (to help me get into the mood) and say, “OHHH, stretch…GOOD stretch, that feels GOOD…”

He would usually come over and lick me on the nose (once he’d finished stretching, of course).

This approach to changing a dog’s behavior is not dissimilar from consciously doing something that most of us do in our relationships; we make an effort to understand and share our loved one’s interests. You don’t necessarily have to take up knitting (if you’re a guy) or memorize hockey statistics (if you’re a gal). Just the fact that you’re willing to make an effort to understand and appreciate the other person’s point of view makes them feel better about you, about themselves, and about the relationship.

It isn’t always easy, of course. Quite often the other person knows you’re only pretending to show an interest in the ballet vs. a monster truck rally, and they may feel that you’re only patronizing them when they know you like Steely Dan and hate Alanis Morrisette yet they see you stop yourself from flipping the radio dial to look for "Do it Again" or “Deacon Blues” the second “Isn’t it Ironic?” comes on.

Dogs are much simpler. They’re easier to fool. And you have to fool them sometimes in order to make them feel that you understand their plight.

What is their plight, exactly?

Well, they’re essentially wild animals living in a “civilized” world. Never mind the fact that they’re one of the primary civilizing influences on the evolutionary development of the human race (in my opinion). They still need and want to do things that we find inappropriate, not to mention downright disgusting (like raiding the litter box).

On the other hand, our desires are very important to our dogs. It’s part of what feeds them, emotionally. And it’s where the old canard that “dogs want to please their owners” comes from. Dogs don’t actively set out to try to please us. That would require having a Theory of Mind, the ability to be aware of one’s own thoughts, sensations, and feelings and to be able to project those same qualities onto others, along with the ability to know that the other person’s thoughts, sensations, and feelings may be quite different from their own. That sounds like a pretty complicated set of thought processes for a doggie to manage.

On the other hand, one of the most amazing things about dogs is that they’re actually capable of experiencing—on a very real, very palpable physical level—what other members of their group are experiencing in-the-moment. Watch dogs at play sometime. When one dog is really into a game with a dog he likes, it’s almost as if the two are connected magnetically. They’re as one. Time disappears, everything just flows. It’s quite fantastic.

To understand this ability dogs have, and how it’s so often misunderstood or misinterpreted, there was a recent study done at the “Clever Dogs Lab” in Austria, purporting to show that dogs are capable of knowing when they’re being treated unfairly.

The dogs were taught to give paw for a treat, then divided up in pairs. The researchers set up a pattern of rewarding the dogs with bits of sausage (or bread) for obeying the “give paw” command. Then after a while, they deliberately stopped rewarding one of the two dogs. When this happened the unrewarded pooch stopped cooperating, and even showed physical signs of unhappiness in terms of facial expressions and body language, which the researchers eagerly interpreted to mean that the dogs felt as if they’d been treated unfairly. Why else would they look so glum?

I’ll tell you why: because they were part of a group activity and were suddenly excluded from it. And I don’t just mean that each of the dogs felt he was one separate, individuated part of the activity. When the feeling of desire is strong in dogs and there’s a group dynamic going on, they feel unindividuated, as if they’re at one with the other dog, at one with the researcher, and at one with the bits of sausage. (This is the way dogs feel when they’re playing together and are in-the-moment, as I described above.) This unindividuated state of desire, especially a desire they’re confident is about to be fulfilled, is one of the most pleasant states a dog can be in. (Kevin Behan goes into much further detail on this in a recent article, available on his website.)

So to be in that enormously pleasurable state while giving paw with your pal and eating sausages together, and then to have the researcher exclude you; it’s like being punched in the gut or having the rug pulled out from under you. You go from feeling totally connected, both emotionally and physically, to feeling totally separated, isolated, and alone. And according to a 2003 study done at UCLA, feelings of social exclusion are registered in the same part of the brain that controls physical pain. This is why separation anxiety is so strong in most dogs who have it. They’re not just feeling lonely, they’re feeling actual physical PAIN.

So when the desire these dogs had for continuing to play the “give paw” game (and the piece of sausage that was part of it) was suddenly squelched, and they were denied the completion of their desire, they went from a feeling of “Isn’t this great! We’re giving paw! We’re eating sausage!” to suddenly being told, “Get out! You don’t belong!” And that’s why they exhibited that sad body language and those glum looks. Their reaction wasn’t one of, “Hey, that’s not fair!” but “Ow! That hurts!”

It’s important to realize that dogs have two distinct ways of interacting with us and with their environment (though when you think about it, we’re probably biggest part OF their environment). One state of being is where they’re in a group mood, and the other is when they’re flying solo. They’re like emotional photons in this way: sometimes they behave like an emotional particle (individuated, separate, alone) and sometimes like a wave (UNindividuated, totally connected physically and emotionally to everything in their environment). So when we do something as simple and as stupid as telling our dogs that they’re the best sniffing dogs in the world or stretch when THEY stretch, it means a lot to them. It makes them feel even more connected to us emotionally than they already do. And the more emotionally connected a dog feels to his owners, the happier and more obedient and responsive he’ll be. It’s automatic.

Don’t just take my word for it. Try it. You’ll quickly see the difference it makes in your dog’s feelings toward you. Not to mention how it will increase his willingness to listen and obey.

For the record: I’d rather be in a relationship with a dog who occasionally raids the litter box than with someone who thinks Alanis Morrisette has “talent.”