How to Redirect Behavior Using Distractions 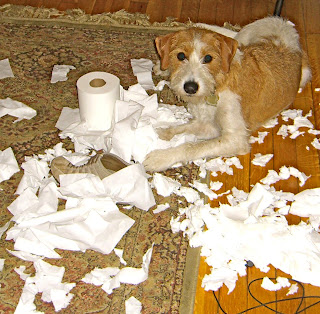 Before your puppy's behavior gets this much out of control, you might want to learn a cool trick that can him stop whatever he's doing instantly. Then, once he stops, you'll be to get to get him to immediately re-focus his energy on you, in the most positive way possible.

I call this exercise, "Distract, Praise, Focus." And here's how to do it.

When your puppy is about to chew something he shouldn’t, make a neutral sound distraction, like a whistle, clapping your hands, etc. Don’t do it too loudly, just loud enough to make the pup stop what he’s doing. Immediately praise the puppy vocally in a high silly voice. This should make the puppy drop what he was doing (or chewing on) and come racing toward you. Keep praising him. When he gets to you, tease him with a toy, then toss it a few feet for him to chase.

Here’s how this works. The puppy is emotionally attracted to an object, like your shoes or the remote. He’s plugged his energy into it, or is about to. Your sound distraction should be loud enough to make him unplug his energy from it on his own. (If it’s too loud it’ll scare him; if it’s not loud enough it won’t have any effect.) Once he’s unplugged his energy from your shoes, etc., you praise him, which will cause him to feel attracted to you. He’ll come running so that he can plug himself into your energy circuits. Then you tease him with the toy (getting him to focus his energy on it), until he’s crazy to bite the toy, then you throw it a few feet and he’ll plug his energy completely into the toy.

If you do this correctly 3 or 4 times, with a particular object, like a shoe, on the 4th or 5th time you do it the pup will go toward the shoe, then stop short, as if he’s been shocked. Then he’ll turn and come running to you. (Pretty cool, huh?)

If you try it and it’s not having the effect described, you may not be giving enough energy in your praise or in your distraction. It helps to use a different sound distraction each time you do it.

This exercise works very well for new puppies. But if you’ve been scolding your pup or taking things away from him, he’ll be more resistant to the exercise.

LCK
“Changing the World, One Dog at a Time”
Join Me on Facebook!
Follow Me on Twitter!
My Puppy, My Self (archived)
Posted by LCK at 10:24 AM