Lack of Cooperation Found in Some Wolf Packs

Why Does Cooperation Diminish as Pack Size Increases?
Originally published in slightly different form on Nov. 9, 2012 at PsychologyToday.com. 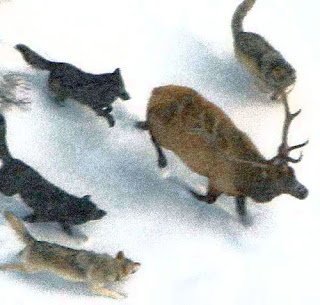 Should the Principles of Economics be Applied to Wolf Packs?

One area of great interest in current biology is animal altruism and cooperation. These qualities are said to exist at all levels of life, from aggregations of cells to human society.

Wolves are often cited as a prime example of cooperation in social animals. Yet research shows that hunting success peaks at about ± 4 wolves. The larger a pack gets, the less successful they are.[1]

Why is this so?

In a 2011 article, McNulty, Smith, Mech, et al say that there are 2 prevailing hypotheses for why group-specific hunting success (Hn) declines in larger packs. The interference hypothesis proposes that Hn is limited because individual predators impede each other’s actions. The other possibility is the “free-rider” hypothesis, a term borrowed from economics, where “free riders” are defined as those who consume more than their fair share of a resource, or shoulder less than a fair share of the costs of its production. (Economics is what gave us the mistaken idea that dogs know when they’re being treated unfairly: see here, and here.)

Defining Pack Hunting Behaviors
The wolf researchers measured levels of participation by pack members during various stages of the hunt, using an ethogram (an objective scientific inventory of a set of behaviors) developed a few years earlier by McNulty, Mech & Smith (2007).

The idea that hunting success was negatively impacted because wolves in packs with >4 members withheld effort was generally borne out by the fact that the rate of decline was most apparent for the most dangerous task above: capture, or biting and restraining prey. In other words, as pack size increased fewer wolves felt like going in for the kill.

McNulty et al conclude: “Our study suggests that [some] wolves in large groups (>4 hunters) withheld effort … and likely participated merely to be at hand when a kill was made.” [Italics mine.]

Personally, I think that’s very unlikely. Don’t get me wrong; this is a dedicated group of scientists who are at the top of their field. They’ve done a wonderful job of compiling research and applying the principles of group cooperation as put forth in previous animal studies based on economic theory, etc. But while their conclusion is right and proper within that specific context it still requires the wolves to engage in some very high-level, humanlike thought processes.

None of these forms of cognition have been found to exist in canids.

McNulty et all would probably counter by saying they’ve drawn no such conclusions. They’re only presenting the data, using a widely accepted scientific model.

This is true. The problem isn’t with their research, which is impeccable. As I see it, the problem is with the model. A wolf pack is not an economic system. There are no goods and services being sold or bartered, no markets or distribution points, no currency changing hands. (There are some similarities of course, but not enough, in my opinion, to make total sense when applied to most non-human animals.) But while there's no currency exchange there is an exchange of information. So I think applying information theory would give us a more parsimonious explanation as to why "cooperation" in wolves decreases as pack size increases.

More Wolves = More “Noise?”
In the ethogram developed by McNulty, Mech & Smith, pack hunting behaviors are described in the most objective of terms. There isn’t the slightest hint or suggestion as to why the animals are exhibiting any of these behaviors. Can lack of success in larger packs also be explained without attaching humanlike reasons for behaviors?

Yes, but in order to do so we have to look at the hunting process through the wolf’s eyes. That doesn’t necessarily mean we’re pretending to know that the wolf’s experience is. We’re just making objective observations about where the wolf’s attention is focused.

When a single wolf hunts small prey on his own he only has to focus on 2 primary external stimuli: 1) the prey’s movements and 2) the terrain both animals are moving through. When the same wolf is hunting with his pack mates, he has another set of stimuli to focus on (at least peripherally), 3) the movements of his confederates.

Is it that simple?

Yes and no. For instance, while all members of a large pack were less likely to engage in the attack and kill behavior, breeding wolves still engaged in those behaviors more often than non-breeders did.

Carrying Capacity and Dunbar's Number
This could be explained through a kind of anti-green beard effect where the individual wolf's genes were running the show. Or it could be explained through differences in channel capacity (or carrying capacity); the operating thesis being that in most cases, breeding wolves are also the so-called “pack leaders,” and as such have to routinely pay attention to more sets of signals than their subordinates do. So whether through experience, or genetics, or both, breeding wolves would hypothetically be more capable of receiving multiple streams of information at once without experiencing them as noise. Since the final act of the hunt is the most dangerous, it also requires the most intense focus. Non-breeders would be less able to tune out system noise, which would hypothetically be what's actually inhibiting them from going in for the kill or actively participating in other aspects of the hunt.

Finally, a simple conjecture: British anthropologist Robin Dunbar has suggested that for human beings there’s a limited number of people with whom one can maintain stable social relationships and that “this limit is a direct function of relative neocortex size.”

My conjecture is that there may be a kind of Dunbar’s number for pack size as well. After all if hunting success decreases in inverse proportion to any pack of >4 wolves, it may well be because there's a limited number of wolves with whom each wolf can maintain a stable relationship. This wouldn't require some wolves to withhold their efforts or “pretend to participate in order to get a free meal.”

I'll leave it to you to decide which model makes more sense.

Footnotes:
1) Computer models show that wolves don't need to form the intent to cooperate while hunting, which suggests, by contrast, that they probably don't withhold their efforts (or fail to cooperate) either.
Posted by LCK at 10:59 AM