7 Games Associated With the Predatory Sequence

I've written a lot about the predatory sequence in several other posts. Here's a more complete examination of this phenomenon, showing how and why playing seven specific games that stimulate and satisfy your dog's prey drive will have a very strong tendency to create calm, obedient behavior by reducing your dog's internal tension and stress.
7 Games That Stimulate & Satisfy Your Dog’s Prey Drive 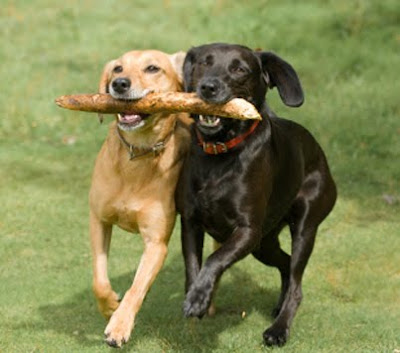 In mammalian predators (which includes dogs), there are 5 basic steps in what’s called the predatory sequence. Each of the steps involves a fixed-action pattern, or hard-wired instinctive behavior, that leads to the 5th and final step.
These steps are as follows:
The Search
The Eye-Stalk
The Chase
The Grab Bite
The Kill Bite
It’s important to understand that for a predator, the act of leaving one’s den or home turf to find and kill prey animals of any size is a dangerous business. In many cases the predator, particularly a wolf, has to venture deep into foreign territory, with unknown changes in terrain that will have to be factored in to its approach to hunting. A predator could easily injure itself by twisting a leg in a rabbit hole, for example, or injure a paw by landing hard on a sharp rock, or rip a hole in its abdomen by running too close to a sharp tree branch.
In order to motivate predators to do their job, Mother Nature has a compelling tool at her disposal: the release of endorphins, one of the body’s own form of opiates. Nature does this at each of the 5 successive stages because the closer a predator gets to its prey, the more dangerous the enterprise becomes.
So in some ways, while we tend to think of predators as the dangerous ones, hunting is almost as dangerous for the hunter as it is for the hunted. Hunting is also more dangerous for wolves than it is for other predators, such as the big cats. That’s because the default setting on the wolf’s prey drive is to go after large mammals with horns and hooves. It’s true that a wolf will also hunt small prey, especially when large, dangerous prey are unavailable. But the wolf's prey of choice is usually over ten times bigger than the average wolf. Elk weigh around 800 lbs., moose around 1000, while the average wolf only weighs around 80 lbs. Also, a wolf doesn’t have powerful claws, as the big cats do. Nor does he have the tooth size or the kind of pressure in his bite that a cougar or cheetah does. So the odds are stacked against him.
However, he has two things working in his favor. One is that he doesn’t hunt by himself, so the feeling of danger inherent to preying on moose and elk is diffused, spread out across the entire pack; no one wolf feels the entire charge. And, since the wolf isn’t going solo, he’s also able to work in-synch with his pack mates: this means he can slack off, take a breather, if a change in terrain favors another wolf’s physical skills, or fall back if he sees an easier, more circular approach to the prey, etc.
The second element in the wolf’s favor is his relentless drive to connect to the prey animals, and his ability to outwit and outlast them. Big cats operate primarily on the element of surprise. So a cheetah or cougar always has to act quickly or lose the window of opportunity. Wolves, on the other hand, usually win by wearing down their prey.
It’s also important to note that wolves who settle near garbage dumps don’t form packs. Coyotes, on the other hand, sometimes do, but only when they need to hunt large prey. So pack formation is actually an ancillary function of the canine hunting instincts.
Finally, it’s important to know that captive wolves exhibit stress-related dominant and submissive behaviors, but that these behaviors are rarely found in wild wolves. The reason for this is that captive wolves aren’t able to relieve their internal stress by going out as a group and hunting large prey, so they engage in internecine squabbles instead. Dominant and submissive behaviors are rare in wild wolves because hunting and killing large prey is the ultimate stress-reducer.
Is this really relevant to dog training?
Of course. Since hunting is dangerous, especially for wolves, and since predators are motivated by an internal, psycho-chemical process to go through all 5 steps of the sequence, and since dogs share a long evolutionary history with wolves, we can learn something about what motivates dogs to learn new behaviors or unlearn old ones by looking at what motivates their wild brothers to hunt large prey.

Plus, all the basic obedience behaviors we normally teach dogs (except the sit) are analogues of the predatory motor patterns found in wild wolves. And since the wolf’s need to hunt large prey is the genesis of all canine social instincts (hunting as part of a group requires intense social cohesion and cooperation), knowing as much as we can about the way wolves hunt may be the most relevant thing we can do to learn about how to best motivate dogs to obey, and how to make a maximum use of their instinctive energy and emotions.

And finally, since all misbehaviors seen in dogs are the result of an inability for the dog to relieve internal stress naturally, and since the prey drive has stress-relief built into it (thanks to endorphins, etc.), it's far more effective to use up your dog's energy by playing hunting games than it by taking him on long walks, or even going jogging together.
With that in mind, there are seven games designed to use up your dog’s energy, naturally, by stimulating and satisfying his hunting instincts:
The Predatory Sequence & 7 Games Associated With It
The Search – “Find” - hide a toy or treat then tell the dog, "Find!" (also called “Hide-and-Seek.” by some trainers, but that's actually a very different game where you hide when your dog isn't looking, and wait for him or her to look around to see where you are, then you suddenly reappear, act excited, and run away.)
The Eye-Stalk – “The Eyes Exercise” (the foundation for the stay)
The Chase – Fetch and “Chase Me” (get your dog to chase you), and “Hide-and-Seek.”
The Grab Bite – Fetch, and Tug-of-War
The Kill Bite – Tug and “Push-of-War” (push while playing tug)
“The Pushing Exercise” is also helpful, not just for using up a dog’s energy, but for removing any emotional blocks that prevent him from relieving his stress naturally through play.
LCK
“Changing the World, One Dog at a Time”
Join Me on Facebook!
Follow Me on Twitter!
Posted by LCK at 10:30 AM

Lee, what is the seventh game? Including the pushing exercise, I only count six. What am I missing?

You're right. I left one out. It would come under the heading of "Hide-and-Seek," as part of either the search or chase aspect of the prey drive.

Would be interested in your view on how this theory applies to hunting dogs that go through all of the steps except the Kill Bite as a part of their "job". Trainers of bird hunting dogs discourage tug of war games and chasing games because the dog's role in the hunt requires that they bring and relinquish the prey. When some dogs such as Labrador Retreivers are not working(during off seasons), they exhibit alot of internal tension and greatly benefit from hunt related games. We play fetch and blind retrieves (hide and seek)with our dog, but don't play tugging games.

I can see how that might be considered a problem. I wonder, though, if the proscription against playing tug with retrievers is related in some way to the overall myth of not playing tug at all.

Dogs are highly capable of differentiating between one behavioral context and another. I've never trained a dog for hunting, so I'm just speculating here, but I think if a retriever is trained to suppress his urge to bite down on a specific type of object (a fallen bird or its training surrogates), in a specific location, then playing tug with a completely different type of object, in a completely different locale, might not interfere with his ability to do his job properly.

If this is too heretical an idea, and you want to smooth out the dog's rough edges, emotionally speaking, during off season, you could always hand feed the dog, using the pushing exercise.

I hope this helps,

first of all: your site is a treasure and really helped to oversome some misunderstandings regarding my view on canine behaviour. Well. The reason I got so interested is the 7yrs old livestock guardian dog-mix I now have with me. I love playing with him and he totally adores chasing me. But: The first chases are always a bit painful - for me. Isz snaps at me. Its absolutly playful, but given his sizes, its enough to be painful. He also jumps up on me and snaps in throat-direction.

So here we are: We both love chasing, but I cant tolerate those hard snaps. The 4th or 5th chase gets always much more less energetic. Any idea how we could direct this into a less snappy game? Would it be worth a try to transfer it into a tug-of-war-session?

Thanks again for all the knowledge you spread here. It enriches the daily live of Isz and me already.

Yes, the "Chase Me" game is actually one way of reducing a dog's inhibitions to play. That's its main purpose. It's not supposed to be a stand-alone activity; it leads to play, and is especially good for leading into playing tug-of-war.