Dogs Have a Theory of Mind, But Whose Mind Is It?

If Dogs Can't Think, How Do They Know What We're Thinking?
Originally published in slightly different form on July 30, 2010 at PsychologyToday.com 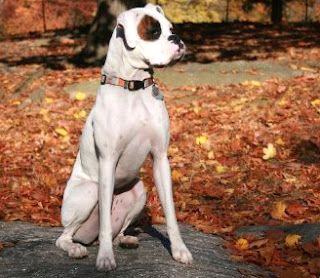 Dognitive scientist Brian Hare's new book is getting some press these days. There was a recent piece in the New York Times on his work showing that dogs will follow where a human points while chimps not only won't, but can't seem to learn how to.

Alexandra Horowitz of Barnard College was quoted in the Times article: “To me, part of being a dog scientist is acknowledging up front how little we know about their cognition. Science has just begun to investigate the dog mind, and our current understanding is minimal. It would be honest to admit how mysterious this other mind really is.”

I don't think it's all that mysterious. I just think it's very different from our usual way of thinking.

The following is a piece I originally wrote for PsychologyToday.com.

Dogs are amazing animals. They have an ability to read us like no other species can. Sometimes they know more about us than we know about ourselves. They also score higher on certain so-called "mind-reading" tests than chimpanzees, where the goal is to see which animal can more reliably follow a visual cue given when a human being points at or even looks toward a prey object.

Dogs can learn to do this quite easily, chimps can't.

To some people this clearly indicates that dogs have a first level Theory of Mind. What does that mean?

If you and I were sitting across from each other and I pointed at something behind you, you would either look to see what was back there or ask, "What is it?" That's because we both know you don't have "eyes in the back of your head." The conclusion that some dognitive scientists seem to have come to recently is that Muttsy has pretty much the same capacity you and I do, while our closest cousins, chimpanzees, don't. (Stanley Coren was in the news last spring, promoting the idea that dogs aren't just smarter than chimps, they also have better math and language skills than toddlers.)

If you think about it, the belief that dogs are smarter than chimps or toddlers challenges two of the most basic assumptions of modern mainstream science.

1) Consciousness is only a by-product of certain bio-energetic processes—most notably the firing of neurons—taking place inside a self-contained organ called the brain.

2) Evolution follows a specific course where, as organisms evolve into higher forms, they tend to become more and more developed, and their levels of development can be clearly seen in their anatomical features, including specific structures found within their brains.

On the evolutionary scale, we would place the canine, chimp, and human brain in that order — canine > chimp > human — in terms of relative size, the number of neurons they contain, and the various bells and whistles (neurological substructures) they each possess.

So, logically speaking, in order for dogs to be "smarter" than chimps or toddlers, we'd either have to ignore the basic principles of evolution, or we'd have to redefine consciousness as something not entirely dependent on the number of neurons firing inside the brain.

Another problem is that these studies always seem to involve getting the dog to find a toy or treat, meaning he's asked to take part in a game involving the "search" aspect of his prey drive. And since dogs are group predators at heart, this means that if the dog's mind is already primed to follow whatever cues might help with the search for prey, it increases the likelihood that a dog will do what we want him to.

Meanwhile, if you were to simply point behind your dog, without first establishing a similar context of searching for a treat or a toy, and particularly if there was nothing actually there, the chances are good that your dog wouldn't look behind him. I've tested this myself with a few dozen dogs, where either I or their owners have pointed behind the dog and said, "[Dog's Name], look!" And so far none of them have been able to follow where we were pointing; they either gave us a blank stare, or looked for something directly in front of them.

My little "field study," as unscientific as it may be, involves a much a larger number of test subjects. Plus, the percentage of dogs that don't exhibit a ToM (100% so far) is much larger than the percentage that do when the tests are skewed by establishing the behavior in the context of a hunting game.

This suggests that something besides a ToM may be at play.

While there are interesting, and possibly important aspects of Hare's work, there’s another problem. He keeps saying that wolves can’t learn to follow human cues when, in fact, recent research shows that they can. Dr. Monique Udell has shown that you simply have to spend some time letting the wolves “get to know you.” (Hare also skews his results by only allowing dogs who show an affinity for playing cooperative hunting games to be part of his studies.)

This brings up another problem: the phenomenon of group consciousness, which is found in all social animals, but is seen most clearly and readily in how dogs form a kind of shared consciousness, both with other dogs and with their owners.

If we see the human/dog dynamic as a self-organizing system, it would make sense that, on a certain level, dogs would automatically be better at reading our signals (particularly if it involves their prey drive) than chimps would, because both dogs and humans have an evolutionary history that involves hunting large prey animals by working in concert. (That hunting-partner relationship still continues whenever we play with our dogs.)

One of the hallmarks of self-organizing systems is that the system is always smarter than the sum of its parts. So the fact that a dog's brain has less carrying capacity than ours—fewer neurons, fewer bells and whistles—works to his advantage. Once a dog has established a working relationship with us, he automatically becomes "smarter," not because he can think for himself, or has a ToM, but because that's how such systems operate. We bring our intellect and emotions to the relationship, dogs bring their intstincts and emotions. Emotion is the common ground.

One of my clients told me a story recently of how she and her husband and their boxer, Fancy, had come home from a walk and had gotten off the elevator. They expected Fancy to go racing to the front door the way she usually did. Instead she stayed right in front of the elevator, refusing to budge, no matter what they said or did.

They chalked this up to some kind of weird, "boxer disobedience." It was only after the husband put his key in the lock, found it wouldn't turn, then looked up at the number on the door, that he realized they'd gotten off on the wrong floor. Fancy wasn't disobeying after all. Her owners weren't paying attention to their surroundings, but she was!

Here's my take on how and why this happened.

Initially, Fancy and her owners were in a group mind-set; they all had the same desire: to go home. To Fancy, when her owners got off on the wrong floor, and urged her to come with them anyway, they weren't acting in accordance with that desire, which is why she balked. She wasn't being disobedient; in fact she was quite faithfully obeying the group's shared desire to go home, despite the fact that her owners unwittingly kept urging her to do otherwise.

I think dogs have an innate ability to tune in to the way we feel. But our mental thought processes would be similar to the static found between radio stations. And by tuning in to our feelings, dogs create an emotional channel between our minds and theirs. This enables them to influence the way we feel about them, which automatically changes the way we think as well. So when people tell me they can sometimes see a "thinking process" going on in their dogs' eyes, I would say that the dog's mind probably isn't adding and subtracting all the possible variables about what to do or how to act in a specific situation, she's probably behaving more like a radio dial, tuning in to the proper frequency that would put her and her owner on the same wavelength.

This wouldn't require us to rewrite the laws of evolution or neuroscience. We'd just have to see dogs from a slightly different point of view: theirs instead of ours.

1) Brian Hare seems to have co-opted my term "dognition" and applied it to his work. I could be wrong of course. He may have "coined" that term on his own, as I did.

2) Kevin Behan has also written about The Times article here.
Posted by LCK at 1:29 PM

Appreciate how you've woven so many complexities into a simple and cogent argument. Shifting our view from the self to the group mind opens the door to a deeper understanding.