Here's a little insight into what causes and cures separation anxiety. 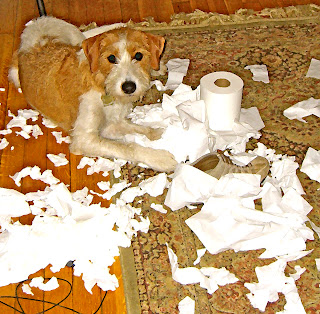 Dogs learn to navigate their lives with their owners by suppressing some of their instinctual urges and energies, the urge to bite in particular. Dogs do this because maintaining social harmony is one of Nature's primary directives for canines. Some puppies are forced to repress their urge to bite by their owners. This almost always results in neurotic behaviors in the adult dog. It's better to give a puppy a satisfying outlet for these urges than to repress them.

Even when the urge to bite has been repressed rather than sublimated, as long as the underlying structure of a dog's social relationship with the owner remains constant and consistent, the dog usually has a pretty good handle on how to “behave himself,” though you may see some cracks in his ability to suppress his urge to bite. This typically manifests through the dog's "personality." (I see personality as the sum of all behavioral tendencies that develop in relation to the demands, conscious or unconscious, that the owner puts on the dog, and how the dog learns to adapt his temperament, breeding history, and natural behavioral tendencies to fit into the human household dynamic).

However, when the structural dynamic suddenly changes it's like a crack appearing in a dam. The water pressure, that's been kept at a steady state, starts to spurt out in little  (or not so little) ways.

So the problem, as I see it, is essentially that the dog's instinctive energies, that have been kept under wraps since puppyhood, start to come spurting, and in some cases, flooding out.

Separation anxiety/distress (SA/D) is said to be related to what evolutionary psychiatrist Jaak Panksepp calls "separation panic," an instinctive response in all social mammals to go into distress when they're separated from their group. It has long been thought that SA/D is caused by exaggerated feelings of attachment to the owner[1].

I believe the opposite may be true. Most dogs don't go into panic mode when left alone in the house or apartment. They're perfectly happy on their own. They just go to sleep and wait for their owners to return. Why not? Dr. Panksepp's research would suggest that these dogs don't panic because they don't feel separated from their people. They feel a constant emotional connection, even when left alone.

So while I agree with the idea that a tired dog is a good dog, and that dogs "need a job," there has been an unfortunate tendency with certain trainers to talk about giving such a dog "mental stimulation," which often means giving the dog a puzzle toy of some kind, where the dog has to figure out how to get food out of an object.

But while puzzle toys may occupy some dogs while the owner is present, the last thing a dog with real separation anxiety wants to do when the owner is gone is futz around with such a game. He wants to reconnect to his owner. And when the owner isn't there to reconnect to, he goes into a panic state, which can manifest as whining and barking, destructive chewing, pawing obsessively at the front door, and in extreme cases repeatedly throwing his body against a door or window.

So how do we resolve this using the Natural Dog Training philosophy?

So when the owner of a dog with separation anxiety is gone, and the dog goes into a panic state, he's driven to connect, through his teeth, to objects in the environment. In many cases this need to connect couldn't be clearer. What objects do dogs seek out and glom onto when left alone? The TV remote. Shoes. Books and magazines. Things that we use, touch, and connect to on a daily basis. In other words, he's desperately trying to connect to you in order to feel connected to his true self, the self that's been lost because of the repression of his instinctive needs.

With all due respect to positive trainers, this is why I think the idea of giving a dog mental stimulation may some send people barking up the wrong tree. What's really needed is a way for the dog to feel connected to his owner through his teeth, i.e., the urge to bite.

With that in mind, hard vigorous outdoor play, where the dog is encouraged to bite a ball or tug toy as hard as he can, twice a day for at least 20 - 30 minutes, is the first step.

Then you need to slowly work through all 7 levels of the stay. These are my names for these various levels, but descriptions of how to do them can be found in any good training book (though Natural Dog Training is the best there is).

2) The Step Away Stay (where you take a giant step away from the dog while holding the leash taut above his head).

3) The Circle Stay (where you move around the dog in a tight circle, while holding the leash taut above his head).

4) The Tug-and-Wiggle (where you tug on the leash and wiggle it while reminding the dog to stay).

5) The Stay With Dancing Master (where you jump up and down, from side to side, run at the dog, run away from the dog, while holding the leash and reminding the dog to hold the stay).

6) The Peek-a-Boo Stay (where you tell the dog to stay, then disappear briefly behind a tree or fence, and quickly re-appear).

7) The Stay With Ultimate Distraction (holding the stay while other dogs race by, while you throw the dogs favorite toy past his nose, etc.).

The first 5 stays and even the 7th stay should be taught in brief, 2-3 minute sessions, followed by playing games like "chase me" and tug-of-war.

The Peek-a-Boo stay should start with very short increments, less than 10 seconds initially. Then slowly build up to the point where the dog can hold a down/stay for 20 - 30 minutes even when he can't see you.

Once a dog can learn to hold a down/stay for 30 minutes, he's usually not bothered by being left alone in the house. (But he still needs a good 20 - 30 minutes of hard, vigorous outdoor play twice a day, every day.)

In support of this hypothesis is that observation that many of these dogs follow their owners around and are reluctant to let them out of their sight. Someone once referred to these dogs as “Velcro® dogs.” But is it truly an over-attachment problem or something else that has gone wrong with the relationship? A recent study by Parthasarathy and Crowell-Davis compared dogs with separation anxiety and those without in a standardized attachment test and when at home but separated from their owners. The attachment test looked at the behavior of the dog when the owner comes and goes from an unfamiliar room and when strangers come and go from the room. It’s a test that has proved valuable in studying attachments in children and their parents.

In the study of dogs and their owners, Parthasarathy and Crowell-Davis found no differences between dogs with separation anxiety and those without the problem, either in the attachment test or in their behavior after the owners were gone from home. It’s always difficult to interpret studies that find no differences between conditions, but the data suggest that the problem may not be an over-attachment problem.
Posted by LCK at 9:25 AM

I was watching a DVD that Dodman has out on SA, He said three things that I hadn't seen elsewhere, which I thought interesting.

The first thing he said, which still does not make sense to me, is that the majority of SA cases start appearing when the dog is about 2 or 3-ish (I may be off a year, it may be 3 or 4 years). I do not know if those were dogs raised at home, rescues, etc.

He also noted that dogs that had close loving relationships as puppies, as with children, tend to produce confident outgoing adults, so this is not the problem of over-attachment.

He also noted that a large degree of SA dogs come from shelter/rescue environments, and with a high degree of certainty, they could predict which dogs going home from a shelter would have this problem. (He also noted that interruptions like prolonged vet stays at crucial times during puppyhood could create it.)

This shelter situation is, in fact, what happened to me. When I first met my girl at the shelter, she sat back and barked at me. After spending some time with her, then put her back in the kennel, and then went back to say goodbye, she was already freaking out when I was leaving. It was immediate. And once home, it was severe. For a dog to be so afraid that they harm themselves, and cannot hold their urine and bowels, is heartbreaking.

I *do* think that your stay exercises are key, and that if a dog can do what you say, they should be better. I do want to add that it is not just a matter of teaching stay, like you would to a normal dog. I have never had such difficulty teaching stay as I have with this dog, precisely because of her SA.

But, as she has become better and chosen to separate herself in more varied circumstances , we have been able to make progress.

I have been trying to think what my next steps would be, and I will use your exercises in our plan, I think we are at the perfect place to be working on them now....thanks for the blog post just when I needed it!!

One of the problems you may be having is that shelter dogs are more likely to develop symptoms of post-traumatic stress.

If that's the case, I recommend reading the following:

I had been following your PTSD posts, but missed the one on bark therapy, thank you!

I think stress plays a much larger role than many realize, I appreciate your posts!

Henry!!! My favorite photo of him....luckily he had gotten over this destructive/separation pause!
Amanda

My favorite shot of Henry is the one in the snow!

I hope you don't mind my using this one. It's such a good example of a dog with destructive tendencies.

It's nice that those days are over.

Oh of course I don't mind. I just mind all the typos in my last post. hahaha!!!

Thanks a lot for this post! It explains what happened to me - I rescued a puppy, Leo, from the street 8 years ago. He suffered from pretty severe separation anxiety and nothing helped until last November I discovered NDT. We started pushing, the eye exercise, playing fetch (where he actually started to bring the ball back instead of running off with it). And .. magically .. a few weeks later I noticed, and the neighbours confirmed, that he is now calm when left at home alone.
I am very happy, and Leo is too :-)

Lisa looking for a kennel said...

My dog used to have extremely bad separation anxiety. I thought one time when I left her that she was going to hurt herself bad if I left her in the crate. Next time I came home she moved the crate 5 feet and there was blood on the floor. The best thing that helped me was routine and making her feel comfortable. Thanks for sharing your tips :)