A Simple Formula for Understanding Aggression

Looking at Aggression From the Dog's Point of View 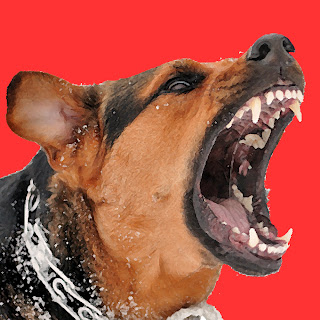 “The primary purpose of aggression is not to hurt and maim but rather to change the behavior of another creature. For that reason dogs clearly signal their aggressive intentions before acting.”
—Dr. Stanley Coren.


“If any of the parties [in conflict] incur injury, then the behavior is aggressive and not dominant.”
—Dr. Roger Abrantes.


According to the Journal of The American Medical Association the number of dog bites in America topped 4.5 million in 2010. This means that 4.5 million people—many of them children—were the victims of canine aggression in just that one year.

Another thing to consider is that our current understanding of aggression has some inherent paradoxes. It's often classified as a survival-based behavior, designed to protect an animal’s survival or the survival of its genetic code. Yet acting in an aggressive manner can endanger an animal, undermining both aspects of its “survival” value. This is especially true of dogs: the quickest way for a dog to be euthanized is to bite someone.

To confuse matters further, in human society the word aggression is often used as a positive. A businessperson might be praised for having an aggressive business model. We might talk of a painter or choreographer showing a “new aggression” in their work. There are “aggressive” forms of cancer. The word can even be applied to invasive plant species.

And clearly if two of the world’s leading experts on dogs—Dr. Stanley Coren and Dr. Roger Abrantes (both quoted above)—see canine aggression in two seemingly opposite ways, there’s not much chance the rest of us can attain any kind of clarity on this. (Coren says that the purpose of aggression is not to harm others but to change their behavior while Abrantes says that the difference between dominance displays and actual aggression is that aggression is done to cause injury.)

That said, using some principles adapted from modern affective neuroscience, from Freud, and from Aristotle's principles of dramatic structure, I’ll attempt here to provide a simple definition that explains all forms of aggression in all mammals including humans

What You See Is What You Get
All scientific explanations of natural phenomena—including animal behavior—should be based on what’s observable, measurable, testable, and repeatable; we can’t know what intrinsic qualities might motivate an animal behavior’s behavior, we can only know what we can see, measure, test and replicate. As Dr. Abrantes noted on his blog recently, “We must distinguish between what we reasonably can claim to know and what we presume or assume.”

Unfortunately, while this is sound science, it seems to almost force us to project human-like thought processes onto animal behavior.

Here are 3 examples, taken directly from Drs. Coren[1] and Abrantes:


1) “A dominant dog will make its body appear large and stiff.”

2) “An aggressive dog will curl his lips back to signal aggressive intent.”

3) “The purpose of aggression is to change the behavior of another creature.”


Here's a list of what we can reasonably claim to know, and what's actually being assumed in the 3 examples above.


1) We can know that a so-called dominant dog’s posture will become more stiff and erect at some times than at others, and that that this usually happens during times of social friction. But we can’t know that he’s deliberately making “his body appear larger.”[2]

2) We can know that a dog’s lips sometimes curl back when he’s feeling aggressive. But we can’t know or assume that he’s doing it to signal his intent.[3]

3) Finally, we can know that during a display of aggression the aggressee’s behavior may change in ways that might cause the aggressor to stop aggressing, but we can’t know that the aggressor had this desired outcome “in mind.”


What kinds of things can we know about a dog's internal states?

I think by carefully observing canine body language, and by finding commonalities in human and canine responses to certain stimuli, we can reasonably presume to know at least a little something about how dogs might feel.

Getting Under the Hood
Of course it's easy for me to stand on the scientific sidelines and criticize how the principle of objectivity almost forces us to anthropomorphize animals. But my position as a dog trainer is that in order to successfully deal with aggression, we have to know what’s motivating the dog. When you take your car to a mechanic, you want someone who can get under the hood, find the problem and fix it.

So what’s under the aggressive dog’s hood? What motivates aggression?

I think it’s a system of some very simple instincts and emotions.

This can be problematic for some scientists, who were taught that an animal's internal states (thoughts and emotions) are unknowable. As Dr. Abrantes writes in the comments section of recent blog article: “Emotions … are difficult to deal with because we cannot objectively observe, register, describe or measure them.”

Modern affective neuroscientists would disagree. Charles Darwin himself wrote an entire book on the similarities between The Expression of Emotions in Man and Animals. Modern researchers like Jaak Panskepp and Tim Dalgleish have located the specific neural substrates controlling human and animal emotions. They’ve gotten under the hood.

Even without the work done by modern neuroscientists, I think it’s entirely possible to see things from a dog’s perspective and still be objective. After all, much of human behavior originates in the older parts of the brain (the reptilian complex and the limbic system), shared by both dogs and humans. In fact while there's a huge disparity in size between the canine and human neo-cortex, there's very little difference (relative to body size) between the older parts of both the canine and human brain. These parts of the brain in mammals haven't evolved much in the last 250,000 years while the human neo-cortex has. So we just have to tap into the instinctive centers in our own minds to find homologues of instincts and emotions that form the motivations for most canine behavior, including aggression.

Aristotle, Dramatic Conflict, and Aggression
Humans are social beings. So are dogs. If you’re reading this on the internet, you’re using a set of tools that allow you to feel connected to other people and to various forms of information. If you’re like some people (a lot of people, apparently), you don’t feel completely grounded unless your smart phone, tablet, or computer are always nearby.

No organism on earth can survive for long without the ability to form connection. Dogs clearly have a need to feel connected, particularly to their owners, and to certain objects of attraction which provide them with feelings of pleasure. I call this “the drive to connect,” derived from the Freudian concept of cathexis, or projecting one's pent-up emotions onto objects (persons and things) in the environment, etc. (Natural Dog Training guru Kevin Behan calls this the “drive to make contact.”) Humans project their unresolved emotions onto hobbies, family members, even movie stars. Dogs project their emotions onto tennis balls, their owners, squirrels, pigeons, and other dogs.

Freud was heavily influenced by Greek philosophers and dramatists like Aristotle and Sophocles. When outlining the principles of drama, Aristotle said that dramatic tension is created when the protagonist’s desires come up against an obstacle caused by a) another character’s behavior, b) the world at large, or c) inner conflicts within himself.

Of course there has to be a precipitating event; some unforeseen occurrence has to interfere with the protagonist’s normal, every day life, his emotional "homeostasis." It’s that initial change in circumstances or internal feelings that sets him down a comic or tragic path.

In the biological sciences, events that disturb an animal’s homeostasis are known as stimuli. A need (like food) or desire (like wanting to play) stimulates the animal, interrupting his homeostasis, creating tension, which, in effect, pulls or motivates the animal to move toward an object of attraction/aggression.

If an obstacle presents itself or comes into the animal’s path and prevents him from attaining his goal, he can a) find a way around it, b) give up momentarily to try again later, or c) push right through it.

It’s my hypothesis that c) is what precipitates all forms of aggression in animals. Pushing past an obstacle is aggression in its most basic form. It's a definition that can be applied to dogs attacking people or business leaders who aggressively pursue their financial goals, etc.

As to whether these feelings will motivate a dog to actually attack another dog, person, or animal is—at this level of understanding—depends on other variables such as temperament type, past history, even something as simple as the dog’s physical health.

What about offensive, defensive and predatory aggression?
If a dog’s emotional balance is adversely affected by the stimulus of a strange dog coming into his “personal space,” or by a stranger (like a mailman) entering his yard, etc., those would be precipitating events, causing the dog to feel threatened, and motivating him to interact in such a way as to return to homeostasis, i.e., a non-threatened feeling state. In neither case could we reasonably assume that the threatened dog is acting aggressively to “change the behavior” of the other being, defending what he thinks of as his “territory,” or attempting to dominate others (put himself in a higher social position).

So using the Aristotlean model the dog's desire is to feel safe and to feel connected. And the obstacle is the appearance of another being that stimulates feelings of danger. The danger doesn't need to be real, either. It may be that the person or other dog triggers physical memories of past experiences of danger the way the sound of chopper blades makes the war veteran feel as if he's back in battle again.

As for predatory aggression, that too can be successfully explained using this basic model. Hunger, and the movements of the prey animal, are the stimuli. The changing terrain and the potential for the target animal’s escape are the obstacles.

Are my hypotheses based on what’s observable and testable?

They’re no less observable or testable than most of the explanations for aggression we have now, explanations that rely on assumptions about a dog’s internal mental states rather than on his or her internal emotional or embodied feeling states.

But for now, I think this gives dog trainers and dog owners a new way of looking at aggression, from the dog’s point of view. And once we know that a dog's aggression is essentially an attempt to relieve feelings of pressure, tension, and stress, we can find ways to show the dog how to find an alternative outlet for those feelings.

My Puppy, My Self (archived)

2) Abrantes makes this statement without seeming to consider how it's possible for the animal to know what he looks like, either to himself or others.

3) A more logical explanation is that the dog's lips curl back reflexively, an unconscious behavior, designed by Nature to get the soft flesh of the lips out of the way of the teeth when a dog has a strong urge to bite. I knew of a pit bull named Augie who lacked this reflex, and was constantly biting through his own lips, even while attempting to chew on a stick or bone.

Excelent article. I have found that in my classes and with private clients if I get them to see it from the dog's point of view AND connect it with something in their life-- THEY learn better at what is going on and are much more willing to make changes.

Thanks, Sandy. That's a good thing to remember.