Dance With Me, I Want to Be Your Partner

One of the most important training innovations that Kevin Behan brought in his book Natural Dog Training, was the idea that dogs experience the world through feelings of attraction and resistance, almost as if each dog were a charged particle or one of Newton’s moving bodies, being influenced by invisible forces rather than engaging the world through the principles of dominance and submission or via associative learning. 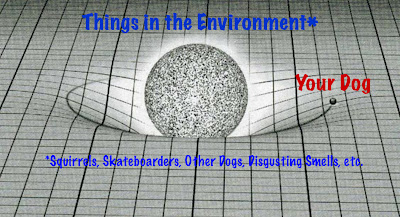 Dogs don’t pull on the leash as much as they’re pulled on by things
in the environment that exert a kind of emotional gravity on them.

There are numerous ways to increase a dog’s social attraction to its handler, meaning that the vigor behind the dog’s usual interest in squirrels, interesting smells, other dog’s hineys, etc., is transferred onto the person at the other end of the leash—meaning you. One cool way of doing that is through what I call the “Dance With Me” exercise.

Once your dog has those skills under his belt you can start doing the “Dance With Me.”

It’s best if you take your dog to a safe, open area where there’s plenty of room to run around, and with few distractions.

Let your dog’s attention wander away from you momentarily. This shows that she’s looking for something to plug her energy “in to.” Without actually giving a recall signal (i.e., calling her to come to you), let her know with a whistle or a kissing sound that you want her to pay attention. When she references you, show her a treat or a toy. (Treats work best when first starting to do this exercise.)

If she comes to you on her own, fine. If not, you may have to start moving away from to increase her attraction to you. Then, as she comes right up to you, invite her to jump up, using the command, “Okay, up!” Then release her, saying, “Okay, off!” in a happy voice.

Ask her to jump up a third time, but once she makes contact with her front paws, place the treat directly under her nose but don’t let her take it. Instead, start back-pedaling while praising her enthusiastically. Keep the treat right under her nose, praising her while moving backwards for about 5 feet or so. Then give her the treat and praise her extravagantly. Do this twice more, then go back to what you (and she) were doing before. (If you have a very large dog, you can place one arm across your chest—as if you’re a Roman soldier, holding a shield—and have the pooch put his paws there.

You can do this exercise any number of times during your walks or training sessions. But I would recommend doing it only 3 times in a row, then taking a break for play or for whatever other activities you and she want to engage in.

The following day (and on the days after that) you’ll want to start making things a little harder by slowly increasing the distance she has to stay up while you backpedal, going from the original 5 feet to 10 feet, then to 15, then 20, to 25, and finally to about 50 feet.

Some dogs will have more of an ability to sustain their “drive to connect” for longer periods or over longer distances than others. So always “reward” the dog with the treat and lots of praise before her drive subsides. If she has trouble staying up as long as she’d been doing the day before, go back a little by decreasing the distance. If on a certain day your dog doesn’t seem as motivated to do the “dance with me” as before, play a game of “chase me” with her first.

If your dog likes to play tug-of-war, another cool variation is to ask her to jump to grab the toy, then backpedal while she tugs on the rope toy or a bandana with knots in either end.

This exercise should accomplish 2 important goals: 1) it will make your dog much more likely to come when called (and she’ll come running with much more vigor than before), and 2) it will help increase her tendency to “stay in the pocket” while walking next to you on the leash, or even off-lead, for that matter.

You can also incorporate heeling into the “Dance With Me” game. As you’re moving backwards, and it’s time to allow the dog to jump down, don’t reward her yet with the treat or the toy, but twist sideways so that she’s next to you in the heel position, and keep her moving in synch next to you, saying, “Heel!” in a happy voice, luring her with the treat or toy. Then give her the treat or throw the ball for her to chase.

I should mention an important caveat. It's not advisable to do this exercise with nervous dogs. Those who have a withdrawn nature won’t enjoy being asked to jump up. They might do it, but they won’t enjoy it. Meanwhile, dogs who have the kind of nervousness that’s more extroverted may have too much enthusiasm; they may not only jump up on you, they may grab your arm or rip your clothing, try to start humping you, or even knock you over.

You should spend time with both kinds of dogs working on resolving some of their nervousness (via “The Pushing Exercise” and “The Eyes”) before getting them to play “Dance With Me.”

LCK
“Changing the World, One Dog at a Time”
Join Me on Facebook!
Follow Me on Twitter!
Join the Rescue Dog Owners Support Group!
PsychologyToday.com Blog (archived)
Posted by LCK at 8:19 PM

I hope you don't mind, but the photo you have on your post was great and suited our blog post as well. I have linked back to your blog on the image.

Let me know if it is an issue and I will remove the photo. Here's a link to the post: http://fwd.ac/04PJIcJjCFL?t

I don't mind you "stealing" the photo. And I found some aspects of your article on energy to be valid, but I strongly disagree with your (and Cesar Millan's) use of the phrase "calm submissive energy." That's just plain wrong.

In truth, both "dominant" and "submissive" behaviors are symptoms of anxiety. And the last thing I'd want from any of the dogs I train is for them to show any kind of anxiety-related behaviors.

The idea that you have to be your dog's "pack leader" is also highly suspect.