Here are a few of the many ways you can teach these "commands" to your puppy. 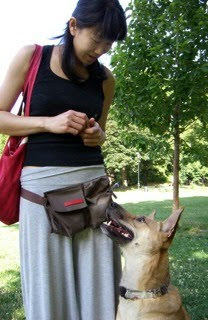 Two of the most important words for new dog owners are “Wait…” followed by “Okay!” They set up a particular dynamic for puppies of learning to pay attention and focus on you when their instincts and developmental urges are telling them to do something else. The act of waiting momentarily, just for a second or so, is then rewarded by being given access either to the thing they originally wanted (or wanted to do), or to something even better. As these two simple words became part of your dog’s daily vocabulary, the word “Okay!” on its own takes on a huge importance in terms of how your dog relates to you and how quickly he or she obeys.

Most owners of young puppies teach their pups to wait for their dinner. They put the bowl down, tell the pup, “Wait…” and then when the pup shows the ability to hold his urges back for a fraction of a second or so, they’ll say, “Okay!” and let the pup run to the bowl and eat, praising him as he does. (Praise is also very important.)

That’s the essential dynamic to using these signals with your dog. But there are other ways to do it. (And this has nothing to do with being the pack leader; the reason you want your pups to learn these words is not so that they will see you as a mythical animal that doesn’t exist in nature, but as a gateway to what’s good and fun and happy in their lives.)

When it’s time to go for a walk, have your dog wait at the front door before you open it. And once the dog shows an ability to control his urge to scratch at the door, or pull on the leash, or to just stop whining or wiggling, say “Okay!” and immediately open the door and let him go through. The more he learns to hold still a bit longer each time, the more you can stretch out from just a fraction of a second to about 5 seconds, which is about the maximum amount of time I recommend.

You can do the same thing at the dog run when you get to the front gate. Or, if you take your dog to the park, have her wait before you unleash him. Say, “Wait…” and allow her to settle for a fraction of a second or so, then say, “Okay!” and release her.

Many people also do this when waiting for a light while standing on a street corner. That’s not a bad idea, but it’s not as important as this next scenario. This is one situation where using these two words really starts to pay off big with a young puppy.

Your pup sees another dog coming toward him on the street. He gets excited. He wants to get to his new friend as quickly as possible. You hold him back, saying, “Wait…” Then as soon as he shows any signs of holding back his energy, even if it’s just the tiniest amount, you say, “Okay, say hello!” and let him make contact with the other doggie.

It helps if you do this as a pre-arranged set up with the other dog’s owner, but I often teach clients how improvise with the dogs we see coming toward us on the streets of New York. This can end up being a bit hit-and-miss, but if you can hold your dog back while signaling to the other dog’s owner that you’re training your dog to learn how to say hello, they’ll often be happy to help you out.

(There’s a second part to this exercise, described below.)*

The fact is, most dogs know what “Okay!” means, even if their owners have never done any of these exercises in a formal way. The owner grabs the leash. The dog wags his tail, acts excited. “You ready to go for a walk?” The dog jumps around, the owner puts the leash on, and says, “Okay, let’s go!” Or they meet another dog on the street, and without doing the formal exercise I described above (or below), once it’s time to move on the owner will say, “Okay!” and the dog is ready to go.

After your dog learns the “Wait…”—“Okay!” dynamic a funny thing starts to happen. The word “Okay”—just said on its own—begins to have tremendous power to change your dog’s state of mind under a lot of different circumstances.

I had a training session years ago with a producer at CNN. She had two dogs, one was a female mixed-breed, about a year old,who had been traumatized by the move from Atlanta, and then had a scary incident in Central Park where she ran away, and was lost for several hours.

I took Fred with me to the session. The producer’s other dog, a male corgi, was older, and had a bit of an aggressive attitude toward most other dogs, especially intact males. But because the younger dog was new to the city, and because Freddie had such a calming effect on a lot of the dogs he met (and because he was usually able to deflect any aggression situation with a dog like the corgi), I brought him with me, something I ordinarily wouldn’t have done.

We left the corgi at home and spent some time walking through Central Park where the younger dog got to feel Freddie’s calming effects. We also did a few playful exercises designed to reacquaint the young doggie with the concept of having fun in a somewhat natural setting. It was a good first step for her.

It was a hot August night, so when we got back to the owner’s apartment on Lexington Avenue, Freddie was very thirsty. The problem was that the only way for him to get to the water bowl was to go past the corgi, who didn’t want to let him. “Uh, uh. My water bowl!”

Normally Freddie wouldn’t have made an issue out of it. He would’ve just let the corgi have his way. But he was really, really thirsty. So after trying to find an alternate route (it was a small apartment), he tried going straight toward the corgi.

The corgi growled and did a lunge and jump back maneuver at Fred. Fred looked around the room to see if he’d missed seeing another way around him, but he was trapped.

I was ready to step in and pull Freddie back when the two corgi really lunged at Fred’s neck, and Freddie dodged him, but his teeth came out. He got ready to defend himself.

Cut to: Five seconds later. The fight had been averted. I led Freddie around to the water bowl, let him drink while the corgi stood panting and watching us. As Freddie drank I said to the owner, “Did you notice what I said to stop the fight?”

She shook her head. “I don’t remember what it was, I just remember it thought it was very odd.”

“But that one word stopped the fight, right?”

“Because most dogs have a strong positive feeling associated with that word. It sort of means: ‘what we were doing is over, now we’re going to do something fun.’ That’s what stopped the fight.”

My reason for explaining it to her this way was to show that it's possible to change an unwanted behavior by using something other than punishment or scolding, which is what she’d been doing with the corgi, and which either she or the female dog’s previous owners had done with her.

The reason for telling the story here is to illustrate how powerful the word “Okay!” can be, even with dogs who haven’t done the exercises I recommend. In fact, any time I sense a bit too much tension building up at the dog run (and this is almost always with dogs I don’t even know), I’ll say, “Okay! Good dogs!” and it almost always changes the emotional dynamic between the dogs who were in conflict. It can be quite comical, too. One second the dogs are ready to attack one another, then they hear a stranger say, “Okay!” and the next thing they know they’re all shaking themselves to get rid of that excess tension.

LCK
“Changing the World, One Dog at a Time”
Join Me on Facebook!
Follow Me on Twitter!
Join the Rescue Dog Owners Support Group!
PsychologyToday.com Blog (archived)


The 2nd part of the exercise is that when you feel it’s time to end your pup’s friendly encounter with another dog on the street, you say to her, “Okay, say bye-bye!” in that same happy tone of voice, and walk away at a brisk, playful pace. Do that enough times and the word “Okay!” will soon be enough to make the pup instantly stop trying to mount or mouth or wrestle with the other dog, and you’ll both be on your merry way.
Posted by LCK at 9:38 AM

Email ThisBlogThis!Share to TwitterShare to FacebookShare to Pinterest
Labels: controlling aggression, how to be the pack leader, important training exercise, teaching a dog to wait, teaching a dog what okay means

This motivates me to do more of the "wait" and "ok" commands. Thanks for this great post and a BIG thank you for adding me tp your blog. I feel honored. Kasha

I should also add that "Okay!" can be used in a lot of situations where you want your dog to stop doing something, whether it's sniffing another dog too long, licking her fur too much, you name it.

Try it and see!

How is this different from a release word used during training?

I'm not sure I understand the question.

"Okay!" is the same word we use when releasing a dog from the "Stay." The only difference is that "Wait..." is sort of a behavioral pre-cursor, if you will, to the stay.

Does that answer your question?