Smart Dogs or Dumb Science? You Do the Math...

I'm sad to have to report that AOL, MSNBC, and CNN have all proclaimed in their headlines this weekend: "Dogs Smarter than Toddlers, New Study Shows" (AOL), and "Your family dog may be smarter than your toddler!" (CNN). I'm sad because it's been my experience, as a dog trainer, that the more that "science" tries to prove how "smart" dogs are, the more dogs suffer as a consequence. (See my article at PsychologyToday.com, "How Dogs Think: The Debate Between Emotion and Logic.")

Smart Dogs or Dumb Science? You Do the Math... 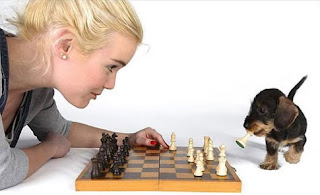 Here's the opening line from AOL: "The canine IQ test results are in: Even the average dog has the mental abilities of a 2-year-old child."

Really? According to what scale? Stanford-Binet? Or Bichon-Frise?

"The finding," AOL goes on to say, "is based on a language development test, revealing average dogs can learn 165 words (similar to a 2-year-old child), including signals and gestures, and dogs in the top 20 percent in intelligence can learn 250 words."

First of all, that's not only not true, it's not even news. That information (or disinformation) can be found in Stanley Coren's first book on dogs published 15 years ago. Coren (both in that book and in the recent online articles) somehow equates a dog's ability to respond, behaviorally, to cues of any kind - including words, hand gestures, whistles, even just picking up its leash - with the ability to both understand the meanings of words and to actually use them in speech. And many two-year olds are not only able to speak, they're also capable of using words in new and unexpected ways. Plus, on a basic level they inherently understand that words are symbols; they represent things. Now, I love dogs, but they don't have anything close to this kind of linguistic aptitude. So comparing simple behavioral responses to verbal or visual cues with actual linguistic ability is not just like comparing apples and oranges, it's like comparing apples and a recipe for apple pie, or what might be even more appropriate, comparing apples and "Mastering the Art of French Cooking."

The recent online articles go on to claim that dogs can also count, add and subtract, and can do simple math much better than a toddler.

From CNN: "Counting ability is tested in drills such as one in which treats are dropped, one at a time, behind a screen. When the researcher either sneaks away one of the treats or stealthily adds an extra before raising the screen, the dog will wait longer - appearing to puzzle over the bad math - before eating the treats."

"Now we're giving him the wrong equation," Coren says of the final part of the study. "The dog acts surprised and stares at it for a longer period of time, just like a human kid would."
The implication here is that the reason the dogs are staring is because they've added up the number of treats in their heads before the screen was removed and have now discovered that some are either missing or that new ones have magically appeared.

But which is more likely, that dogs are able to feel an emotional attraction to certain things in their environment - toys, treats, other dogs - and can therefore "sense" when something's missing (or has been added)? Or that they engage in some form of mental arithmetic and count out, by number, how many things were there initially and either do addition or subtraction to "figure" it all out?

Here's an idea: what if the study had been done with objects that didn't interest the dogs? Toddlers can be taught to count on their fingers and toes, or to count the number of cats in a drawing, or to count spoons or matchsticks or cracks in the sidewalk or other items that wouldn't interest a dog in the slightest. Plus, how do the researchers know the dogs were really surprised when the screen was removed and weren't just feeling uncertain as to what the researchers wanted them to do next? To me this "study" seems to be a perfect example of confirmation bias, and as I wrote in a recent article here, "Dogs are confirmation bias with a tail." They'll do pretty much whatever you want them to, especially if there's nothing else very interesting (to them) going on at the time.

What Coren (and the "reporters" at AOL, MSNBC, and CNN) have failed to mention is that all animals, including rats and even some insects, have a basic "number sense." It's innate, it's hard-wired, it doesn't require arithmetic. Never mind toddlers; even 5-month old babies have this ability. So no, dogs aren't better at math than toddlers. Far from it.

In Where Mathematics Comes From: How the Embodied Mind Brings Mathematics into Being, George Lakoff, a cognitive linguist, and Rafael E. Núñez, a psychologist, argue that even the most abstract mathematical constructs arise from how the brain and physical body interact together with the world. They write, "Animals have numerical abilities -- not just primates but raccoons, rats, and even parrots and pigeons. They can subitize [instantly and fairly accurately perceive the numbers of things in a very small collection, as a robin might do with her eggs or a dog with his toys], estimate numbers, and count [just] as four-and-a-half-month-old babies can." (p. 21)

However, Coren insists, "These studies suggest dogs have a basic understanding of arithmetic, and they can count to four or five."

First of all, having an innate sense of quantity - again as a robin would with her eggs or a dog would with his toys - and having a "basic understanding of arithmetic" are two entirely different things. We're back to comparing apples to ... I don't know, multiplication tables. We could carry Coren's logic even further and ask: when a dog catches a Frisbee in mid-flight has he done some form of differential calculus in his head in order to predict the object's trajectory? Of course not; it's a simple sensori-motor skill. (Maybe not so simple, but the dog's behavior is not based on math or other feats of intellect.)

And while it may be true that dogs can be taught to "count to five," their ability to do this is not in the same ball park as a toddler's: not even close. (Remember, dogs don't have the ability to use language, therefore they have no words for numbers.)

In 1930, mathematician Tobias Dantzig first proposed the idea that animals and humans have a kind of mental accumulator, giving them what he called a "number sense." This is not the ability to count but a natural sense of knowing when something has changed in a small collection of items. In The Number Sense: How the Mind Creates Mathematics, modern French mathematician and cognitive scientist Stanislas Dehaene writes: "Whatever its exact neuronal implementation, if the accumulator model is correct, two conclusions must necessarily follow. First, animals can count, since they are able to increase an internal counter each time an external event occurs. Second, they do not count exactly as we do." (34) (Dehaene disagrees with Dantzig about what "counting" means - but then, one was German the other French.)

It's true, though, in a way. I taught my own dog Freddie to "count" to 5 many years ago: I would give him a number between 1 and 5 and then give him a treat if he barked 2, or 3, or whatever number of times I asked him to. But I didn't reward him if he barked out the "wrong" number. And sure enough, after repeating this procedure over and over many times, Fred learned to bark in accordance with the number given. The thing is - and maybe it's just because I have a different sensibility than Coren and others - I never got the impression that Freddie understood what he was doing. It was purely a rote behavior; he wanted that treat. That's light years away from "having a basic understanding of arithmetic."

So are these recent articles really a case of smart dogs? Or is it just more dumb science?

I'll let you do the math.

"Changing the World, One Dog at a Time"
My Psychology Today Blog
Join Me on Facebook!
Follow Me on Twitter!
Join the Dog Trainers Network!
Posted by LCK at 2:18 PM