This article also appears at PsychologyToday.com. 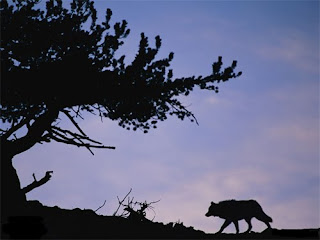 "Nothing in nature is random." - Spinoza

This is one of the strangest and most intriguing stories I've ever come across. It starts simply enough with a pack of gray wolves living happily in British Columbia. Then one day, in 1995, while they were out doing ordinary wolflike things, they were tranquilized by a group of biologists, fitted with radio collars, then transported to a new environment: the Lamar Valley in Yellowstone National Park. They were dubbed the Druid Peak pack, named after a central geographic feature of the valley. By 2002 -- after six or seven generations of new wolves came along -- the pack was getting a little too big to sustain itself. So a group split off, left the valley, and formed their own pack near Slough Creek, where, over the next several years, they grew to outnumber their old pack mates by almost three to one.

In 2005, when PBS began filming In the Valley of the Wolves, to document this phase of the wolves' transition to the park, the Druids had been ensconced in the Lamar Valley for over twelve years. They were reportedly now "at war" with the Slough Creek Pack, though the incursions from their rivals were few and far between. There was also a coyote husband and wife living in the valley, enjoying a semi-peaceful co-existence with the Druids. They would often approach the Druids' latest kill from a safe distance, and, in an almost pro forma way, one or more of the Druids would launch a mock attack.

Coyote: "Sorry, we were hungry. We'll come back later."

Even when the Druids were hunting it was almost like a game to them. It was only when they got in close enough to be gored or maimed by their prey's horns and hooves that their teeth came out.

There was also a lone wolf who apparently wanted to leave the Slough Creek pack. He would occasionally come around, trotting behind the Druids at a safe distance, eyeing a particular young female. The father repeatedly chased him away, not in a mean fashion, just a kind of, "She's too young for you!" The female's attraction was stronger than her father's objections, though, so her suitor was eventually allowed to join the family.

And family is the key word. If you were to compare life in the Lamar Valley to a 1950s television show, it would've been more like "Leave it to Beaver" than "Wild Kingdom."

That all changed in the winter of 2006 when the Slough Creek pack came into the valley, launching an all-out attack on everyone in it. In a period of just a few days they had killed the mama and papa wolf, scattered the rest of the pack, slaughtered more elk than they could eat, and instead of just chasing the coyote couple away from their latest kill, they systematically chased down the husband and ripped him to shreds while his helpless, now-pregnant wife watched, terrified, from a distance. Then, their thirst for blood still not satisfied, they came after her too. Luckily, she was able to scramble safely away.

Then spring came slowly, as it does in the high country. Several of the Slough Creek females had given birth, and were raising their litters in a group of dens on the side of a hill sheltered from the lingering snow. The valley's victors, the Slough Creek males, had grown a bit lazy. They had let their guard down. So they weren't prepared when, one day, as they returned from a hunting expedition, they found a group of mysterious black wolves -- very different in color from the mostly grey and brown Druids and Slough Creekers -- who had come marching into the valley, taken strategic positions on the hill, and staged a siege outside the dens of the nursing females. These interlopers -- while fewer in number than the Slough Creek males -- easily fended off all attempted sorties. There was no way for those males to get food to their wives and pups.

The black wolves did nothing but wait patiently on the side of that snow-covered hill. The days turned into weeks, and one by one, every single Slough Creek pup in every litter died slowly of starvation. The helpless adults were bereft, agitated, in a state of terrible distress, so much so that by the time the black wolves finally left the valley, never to return, the Slough Creek pack scattered to the winds, their spirits broken.

It wasn't long before the Druids came out of hiding, joyously re-assembled, and re-took control of their beloved valley. For them, it must have been the best spring in years.

As mysterious as this event was, on a certain level we can sort of understand the behavior of the Slough Creek pack. They wanted the valley. They had superior numbers; they came in and they took it. Still, they didn't have to kill the coyote husband; he was no threat. In fact, by chasing him down and killing him, they used up more energy than it was worth. So did killing more elk than they needed. If one of the laws of nature is the conservation of energy, then these wolves weren't aware of it.

Even so, that's not what's really puzzling. What's really hard for us to wrap our minds around is the behavior of those mysterious black wolves. They weren't following the rules of nature either. Far from it! They weren't after the valley's resources. They didn't do much if any hunting there. They just waltzed in, surrounded the dens, waited for all the pups to die, and then left, as if that were their sole purpose, which makes no sense at all. Who were they? Where did they come from? Why did they do what they did?

Biologists and evolutionary scientists can't explain this. To them it's either an extended example of biological altruism (their behavior benefited the Druids), or just a random event that holds little or no meaning.

Yet we also have no explanation (other than, "Gee, aren't dogs wonderful?") for incidents like the one reported on NPR last week: A pointer named Effie, was out for a normal walk with her owner. But within a few minutes she started pulling to go in a different direction, than took off running to a nearby house where a 94-year-old man was lying unconscious, face down in his driveway. The dog started licking the stranger's face. Her owner called 911, then began doing CPR. Together, they saved the man's life.

Why do these things happen? How do we explain them?

The only answer I can think of is that that dogs and wolves may have their own form of Twitter and Facebook, their own social networks that help them tune into situations that require action when someone in the network is in danger, or perhaps even when the network-as-a-whole is out of whack. The difference is that we react to situations like the one going on right now in Haiti, or the Tsunami several years ago, both from a gut level, as animals do, and from a plane of conscious thought. "Oh, those poor people!" we think, and wonder how we can help. Then we start networking.

Dogs and wolves can't text each other; they don't have thumbs. But they can definitely feel what someone else is feeling, and they seem to do so as if it's actually happening to them. From my observations, canines also seem to have a gut reaction when something's not right in whatever social network, large or small, they're a part of. For Effie, that network may be her neighborhood. For those mysterious black wolves, it's a much larger network, one that includes the entire Yellowstone basin. In fact I would argue that it consists of all wolves and coyotes, along with the birds, the elk, the aspen trees, the rivers and streams, the weather systems, the sky above and the earth below, and even the PBS cameraman, drinking coffee from a Thermos, munching an energy bar, and making breath clouds behind his telephoto lens while waiting for the wolves to do something interesting.

Konrad Lorenz, who's responsible for most of the misinformation we now have about dogs and wolves, was still a brilliant scientist, capable of keen insights. One of his theories on ecology is the idea of feedback mechanisms. "In nature," he writes, "these mechanisms tend towards a 'stable state' among the living beings of an ecology: A closer examination shows that these beings... not only do not damage each other, but often constitute a community of interests. It is obvious that the predator is strongly interested in the survival of that species, animal or vegetable, which constitutes its prey. ... It is not uncommon that the prey species derives specific benefits from its interaction with the predator species." (Civilized Man's Eight Deadly Sins, 1974, p. 33). As if to prove this point, after the Canadian wolves were relocated to Yellowstone, a funny thing happened; the aspen trees, which had been dying out, made a comeback.

I don't think the black wolves came to Yellowstone to rescue the Druids from the evil Slough Creek pack. It's easy for us to see things in those terms, black and white, heroes and villains. But I think the black wolves came simply because they were part of a natural Lorenzian feedback mechanism. The Slough Creek pack had gotten too big and powerful for the network-as-a-whole. The black wolves felt a disturbance in that network, so they took action, not to punish or "unfriend" the Slough Creek wolves, and not to rescue the Druids either, but simply to restore the network to its optimal setting. (It's telling that they didn't kill any of the adult wolves; they simply got in the way of their ability to provide food to their young, which prevented a new generation from becoming part of a pack that had already grown too big.) To me this is the only explanation that makes any sense.

The key feature of wolf behavior is their ability to hunt together as a cohesive social unit. In order to do that, you have to have enormous social and emotional flexibility. You have to be able to read each other's social signals very quickly and extremely well, especially in a high-pressure situation. When dogs begans domesticating us, around 12,000 years ago, they expanded on the wolf's natural social networking skills, so that now they exhibit an extraordinary ability to read human social signals in a way that's far more developed than what we find even in our closest biological relative, the chimp. (In some ways dogs are far more social than even we are!) Their social intelligence is the primary reason dogs are the current "it" animal for cognitive research.

So the next time you take your dog for a walk, switch off your cell phone or Blackberry. And don't worry that you'll be out of touch; you'll still have a direct connection to one of the most wonderful and miraculous social networks ever created, right there at the end of the leash.

Having seen the PBS "Valley of the Wolves" show and the sequence of the coyote getting ripped up, I am fascinated to hear this background story of how the black wolves broke up the Slough Creek pack.

Thanks. The mysterious black wolves didn't just break up the Slough Creek pack, they made sure that their DNA was wiped out entirely. That's why they staged a siege outside the dens where the next generation of puppies were being nursed.