Part of my reasons for re-starting my blog here was that it gives me and the readers an easy way to find favorite blog posts from my Amazon days. I'm in the process of going through all the old posts and consolidating them. This is the first post that I think should be available here. Enjoy! 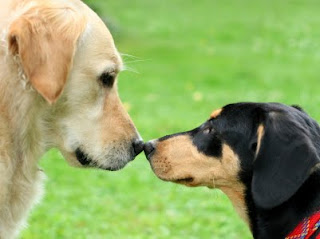 Hi LCK. Great posts. I found your blog through urbanhound.com.

So I basically have a sort of blanket question on this story of "walking two aggressive dogs together".

I was wondering what made this work? What was different about this walk as opposed to the other encounters that these dogs had to one another? Could the owners have done what you did and got the same results?

Yes, the owners could have gotten the same (or similar) results, as long as they kept praising the dogs and didn't allow any of their own internal tension to be communicated to the dogs.
What was different was that in this case the dogs were walking side-by-side. Dogs who lunge at and try to kill one another rarely get a chance to do that. Most of their encounters are head-on, not side-by-side.
LCK

Shep is a 10 year old Blonde Cocker. His original owner passed away, then he was placed in multiple foster homes where he did bite people. He has now been with us for 7 months. He has severe guarding issues, and will bite. We have not been bitten, but we are very careful. Do you have any blog info of type of things to help deal with a Blonde Cocker Spaniel (FOSTER DOG, MISSISSAUGA HUMAINE SOCIETY). I have tried alot of behaviourists and though he is alot better, he has no chance of adoption at this time. He has had a physical exam, we are trying him on Throid medication, though he levels were just a bit low. To sum it up, he will guard anthing he perceives his, he is totally controllable when we have him on a leash. He appears to act the way they describe dogs with the Cocker rage. Like a pussy cat one minute, and then a crazy man, willing to bite those closest to him. I have to soon make a recommendation on wether he should be euthanized, or should we continue working with him. My gut says not yet, there may be answers out there for him. I have the sense that he was probably a very dominant dog who ran the household, and then i think he was roughed up alot, either in the orignal home or with the foster, probably because of his crazy attachs. Lately I have been keeping him on his leash at all times, because he will back down right away if he starts guarding then realizes he is on the leash and that I have control of him. Any thoughts or direction would be appreciated. He is good with my cats, and is good with a dogs that don't bug him. Once SHep is outside the house, he is a little angel and charms the pants off everyone. Then once he settles in "his house" he starts the guarding thing". He was also basically untouchable when he first came here, he now allows petting and actually enjoys it in the morning, but still has times he will growl when touched. He will let the vet and staff trim his nails, but he goes ballistic if we try to touch his feet ourselves.

thank you in advance,

This is a difficult enough thing to deal with in real life, and there's really no way for me to know exactly what's going on with your dog specifically, or to give you enough details in this kind of forum to change this behavior.

However, I will say that I don't think this sounds hopeless. You're already on the right track with some of the things you're doing. You just need to realize that all aggression is based on fear, and that if you can reduce your dog's fear quotient enough the behavior should stop on its own. If you can get him to play tug-of-war with you outdoors, that will help a lot, as long as you always let him win and praise him enthusiastically for winning. (Read Neil Sattin's blog for ideas on how to use tug in training.)

I also recommend you read my posts on the "pushing exercise" ("Swimming Upstream"), "The Eyes Have It," and "How to Manage Your Dog's Energy." You can also check out some of the other posts on Neil Sattin's blog.

Print them out so you'll have a hard copy. Once you've read, absorbed, and applied them, let me know how it's going. If you need further assistance I offer phone sessions.

I hope this helps!
LCK
http://www.naturaldogblog.com/blog