Sigmund Freud and the Art of Dog Training, Part I

Here's the first article in this series...


Sigmund Freud and the Art of Dog Training, I 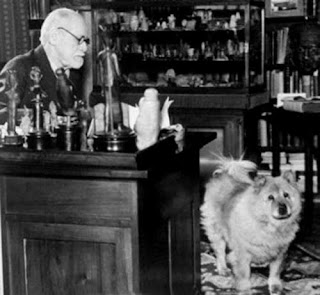 I'm a Neo-Freudian dog trainer. It says so in my bio.

One of the first indications of this came while I was working with a Rhodesian ridgeback who had fear issues; she was scared of the construction noises in her Manhattan neighborhood. After one of our sessions - where we were able to get her to have fun walking past the jackhammers by using a favorite toy to build her prey drive - her owner, a psychotherapist, asked me if I'd ever studied object relations theory.

"It seems to me that your ideas about dog training are based on it."

So I went to the library (this was pre-Google), and did some research. I found that the term "object relations" was first coined by Ronald Fairbairn (in 1952), but that Freud used the term as early as 1917 to identify the people in a person's sphere of influence as "objects" of drives or desires.

Huh. I did sometimes refer to toys as "prey objects" and treats as "food objects," though I didn't know why. I also work a lot with a dog's prey drive, for inducing obedience and for healing wounded emotions.

But still, isn't Freud passé? Sure, most of us still use Freudian terms. When people say that someone is narcissistic or anal-retentive, we know immediately what they mean. Yet - except in Woody Allen movies - Freud is now considered completely obsolete, or worse.

"Whenever someone mentions Freud," writes poet and novelist Siri Hustvedt, in her blog article Who's Afraid of Sigmund Freud?, "I see eyes roll and listen to the nasty remarks that follow. The received knowledge, even among some highly educated and informed people, is that Freud was wrong and can be relegated to history's garbage can. ... the general attitude is one of out-and-out hostility."

Hustvedt then points out that modern neuroscience is starting to validate some of Freud's "outmoded" ideas. "No neuroscientist today would say that the unconscious does not exist. No one working in the field would argue against primal emotional drives in human beings either. Freud is no longer dismissed as quickly as he once was."

This is a kind of poetic justice since Freud actually studied neuroanatomy at the University of Vienna under German physiologist Ernst Wilhelm von Brücke. It was Brücke, who first proposed the concept of "psychodynamics" in 1874, along with physicist Hermann von Helmholtz (one of the formulators of the first law of thermodynamics). Brücke and Helmholtz stated that since all living organisms are energy-systems, they must be governed by the laws of thermodynamics. This became the springboard for Freud's psychology.

Modern neuroscience really is validating Freud. A new paper by R.L. Carhart-Harris and K. J. Friston, published in the Oxford University neurlogical journal, The Brain, posits that Freud's view of how the Ego (the conscious mind) is designed to monitor and, if necessary, suppress impulses coming from the Id (that is the more archaic parts of the mind, or the "unconscious"), is, in fact, grounded in actual physical brain structures, as well as the types of brain waves that different parts of the brain, such as the limbic system (which controls emotion) and the pre-frontal cortex (the seat of executive function) use as part of their operating systems. They write, "Freudian concepts may have a real neurobiological substrates [that] could be usefully revisited in the context of modern neuroscience." They go on to say that new advances "allow us to recast Freudian ideas in a mechanistic and biologically informed fashion."

But still, a neo-Freudian dog trainer?

It's true that Freud was a dog lover. But seriously, when we think about canine behavior, Sigmund Freud is not the first name that comes to mind. (Does Pavlov ring a bell?) Most dog trainers trace their philosophy back to either Konrad Lorenz or B. F. Skinner. Very few would consider Freud a major influence.

All three were geniuses who made a major impact. However, even though Freud is now considered old-hat, every single one of Lorenz's views on canine behavior have been proven invalid1. And while Skinner's ideas still hold sway in most animal training circles, holes and cracks in his philosophy began showing themselves from the outset2.

So even though no one thinks of Freud's ideas as being relevant to dog training, to me they're much more helpful, and much more relevant, than the Lorenzian or Skinnerian models.

Next time: how understanding Freud can 1) be of immense benefit to dogs with PTSD and other disorders, 2) show us that by punishing a puppy for mouthing or soiling the house we create neurotic behaviors later on, and 3) help us learn that teaching puppies obedience skills before their brains are developed, can create social, emotional, and even neurological disorders.

1) Raymond and Lorna Coppinger, in their book, Dogs: A Startling New Understanding... report that when they met Konrad Lorenz he told them right off the bat, that "everything I ever said about dogs was wrong."

2) See Chomsky, Dennett, and many others. Or read my "Of Mice and Mutts" articles: Why Behavioral Science Is Losing the Training Wars, Is Behavioral Science Failing Our Dogs?, The Negative Effects of Positive Reinforcement, All Dogs Are Good Dogs at Heart, and SeaWorld Is Giving Their Star Performers a Raw Deal.
Posted by LCK at 3:34 PM

So you know what's funny, is I was watching a syndicated episode of Frasier last night, and in it, Frasier is doing his radio show, and his ex wife, who is also a psychiatrist, calls into the show, making fun of his advice to a previous caller, ridiculing Frasier for still using his antiquated Freudian theories.

The original caller had called in talking about how he had a problem with food, and this need to overeat.

I found it so funny because it's the same conversation that happens when discussing NDT with behaviorists, as well as dominance trainers for that matter.

Looks like if Frasier were a dog trainer, he'd agree with you completely Lee. :)